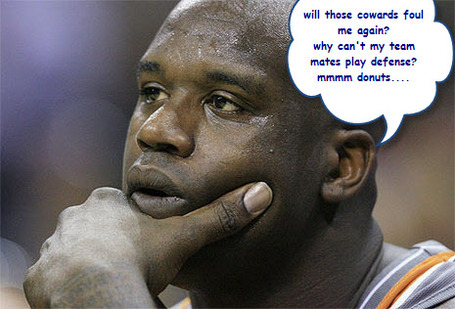 Audio from after today's practice. You can hear the following tidbits...

Audio clip with only Shaq

My bad. I misremembered the many end of game daggers from game 1 of the Spurs series last year.

Amare didn't switch on Finley's end of game 3. He wasn't on the floor for Duncan's fucking three. That would have been either Nash or Bell that should have followed Shaq's defensive call to switch.

I do agree with Shaq that everyone needs to be on the same page. I am so glad he's here to provide leadership and enhance team chemistry by calling these things out and making it clear that shooting 50% from the line isn't his fault but should be blamed on the cowardly Spurs.