The Suns downed the Hawks in their fourth pre-season game making their meaningless record 2-2.

Reading from the box score we see that rookie Singletary went 5-6 for 15 while Lopez had 9 boards and 9 points in 30 minutes of play. I can definitely live with 9 and 9 from our rookie center especially if he can put up those numbers playing with Amare and the other starters.

Rounding out the night was improved shooting from Bell who was on fire early and Diaw who seemed to have a solid game sporting his new braided look.

Let's hope that tough hair brings tough play. So far, I am cautiously impressed with Boris this pre-season. At least he didn't come into camp over weight. My pre-season early gut impression is that he's more focused and more aggressive. Let's hope that continues when he's coming off the bench. 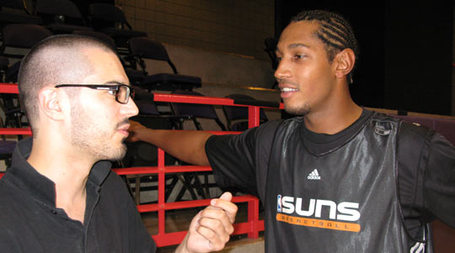 The big news of the night was Nash's ankle roll. I've yet to find any film so all we know at this point is that he went up for a jumper (which he made) and landed on someone's foot. Bruce Bowan is not thought to be involved.

Nash was on his way to a solid knock-the-rust-off game with 11 points 2 steals and 6 assists in 13 minutes of play. He didn't return in the second half.

We will have to wait until tomorrow to find out if this is a routine ankle roll that will bench him a few days or a Pau Gasol multi-week event.

Amare and Barbosa both were held out as they work to regain their wind and get up to speed with Porter's system.

Shaq was given the night off after his hard work at yesterday's practice picking fights with championship coaches and throwing his team mates under the bus. He needed the rest.

In other news, DJ Strawberry lead the Rockets with 20 points. He appears to have been playing the 2 guard and scored 9 of his points at the line along with a solid shooting night. DJ can score at times and can certainly draw fouls (at least against the Grizzlies young guards). Like Barbosa, he will have to contribute off the ball if he's going to stick.

Update on Nash's ankle from Suns.com

Head Athletic Trainer Aaron Nelson told Suns.com on Wednesday evening that nash had “minimal swelling” in his right ankle.  He is expected to be held out of Friday’s game but will be day-to-day after that.