Actually, I probably wouldn't have stayed if this wasn't Ma Kelly's first in-person game since Barkley was still in town (check out that link; whooda thunk she did more than cook noodles in beer).  It was still fun, though.  The deep reserves finally started to loosen up about half-way through the second OT.  I don't know what, if anything, this means for the regular season as I'm relatively certain that Louis Admundson would not normally be jumping center at the beginning of OT with Dragic and Hite in the backcourt.

Hite has a nice stroke but he was abused on D even worse than Nash's worst nightmare.

Barnes had a nice, confident court presence.  Sticking to the positive on the Matrix comparisons, he has a better handle, a semblance of a post game and picked up D.J. Augustin on the perimeter to force a second overtime.  He looked confident with the ball, but needs to shoot less threes.  Go look up his career average.  I'm also not thrilled with his late-game play being rubbing off a high screen to jack a 3.  He's no Steve Nash.

Amare looked over-hyped.  His goggles make him look like he belongs on a shooting range. 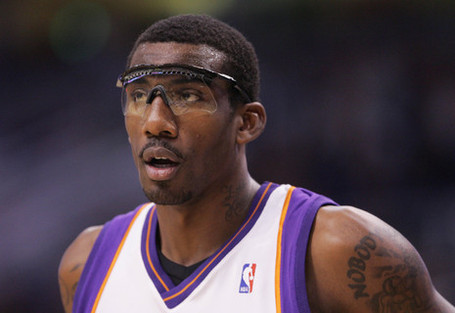 I figured out the thing that kills me about Boris -- and its just one thing, that's the horrible part.  He makes almost all the right moves on offense, he makes nice cuts opening the court for his teammates even when he doesn't get the ball, he always gives the ball-handler a second option, he sets wonderful moving screens and rarely gets called for them, he handles the ball well and passes well.  Why can't he just take it to the rim hard every once in a while?  Just ocassionally!?  His defense remains very good and he even battled for some boards.  He shall remain the most frustrating player on the team.

Lopez had some nice blocks, but never got rolling offensively.  He's shoulder-rolled-forward hunch to him that makes his trot reminiscent of someone ... a presence I've not felt since ...  He plods along and gets to his spot.  I've not seen any offense, though.

It seems that Bo Outlaw has given Amare his goggles and his "hustle without a shot" attitude to Louis Admundson.  How long before Lou is sitting on the baseline waving a towel and shagging balls?

Nash was in his warmups and kept stretching along his normal spot on the baseline.