Bright Side of the Pinkie

Share All sharing options for: Bright Side of the Pinkie 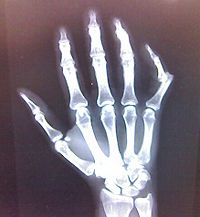 Great news today via Suns.com regarding the littlest finger on the weakest hand of the BEAST of a Man known as Amare.

“I made a move to the middle, and it just spun back. The contact between ball and hand is where the dislocation happened.

“Trainer Aaron Nelson tried to pop it back in but couldn’t do it, so I came back here and had (team physician Thomas Carter) get it back in. It took awhile, but I feel great.”

Carter told Suns.com, “Amar’e dislocated the middle joint of his pinky, and sometimes they are a little difficult to (correct) if they are muscular and the finger is swollen. We brought him back to the training room, no fracture was found and we splinted him. He’ll be able to play anytime he wants. It all depends on how he can control the ball with his hands.

“We’ll tape the fingers together when he’s playing, and other times he’ll wear a splint for several weeks.”

“He’ll be fine and ready to go,” Porter said. “They just popped it back in place. It’s an occupational hazard, but it’s nothing.”

Rest easy Suns fans. I know when I heard this late last night my little heart skipped a beat. But it seems like the only impact will be that Amare will have to use his other little finger to crush the lesser men that try and stand between him and the rim.

Does Chad Ford really need to worry about the Suns offense in the half court when you can just give the ball to Amare in the high post and get out of the man's way?

It may not be as flashy as running-n-gunning but the Suns have plenty of fire power left in their pinkie fingers.