Remember the Alamo: Phoenix Suns look to Rise from the Ashes in Season Opener

Share All sharing options for: Remember the Alamo: Phoenix Suns look to Rise from the Ashes in Season Opener

Throughout history fans and nationalists alike have rallied around the symbols of their greatest defeats. Wounded Knee. Pearl Harbor. The last hundred years of Cubs baseball. And just ask a Serb about Kosovo Polje. 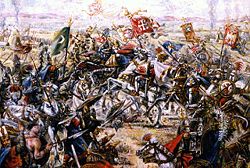 But in what must be one history's greatest ironies, both Suns fans and Texans rally to the same Alamo cries. Both suffered tremendous defeats on virtually the same ground.

In the case of the Texans that defeat eventually lead to independence and the formation of the Republic of Texas. History has yet to reveal if the Phoenix Suns will rise from the same ashes to achieve similar glory.

However brilliantly scheduled by the NBA, returning the Suns to San Antonio for the season opener is still a meaningless game.

No team has even shown a greater ability to pace itself through the long season than the Spurs. And no Sun should think twice about the outcome of this first game. Even if the Suns sweep the season series by a combined point total of +100 it won't matter at all. Until the Suns win four games against the Spurs in April or May we are their door mat.

Enjoy the start of the season.

Enjoy the hype that will come with this game.

Even try and enjoy the 37.000 inevitable replays of Tim Duncan's improbable and amazing three pointer.

Embrace the pain the Spurs symbolize for all Suns fans and hope for a victory. But don't forget that this game doesn't count for anything more then the first of many wins and loses that both teams will rack up this season.

The road to redemption begins and will hopefully end in San Antonio (a crappy little hell hole of a town with a fake river and over priced restaurants as its main attraction) next spring.

And burn the mother f*#ker down!