Share All sharing options for: Phoenix Suns Down San Antonio Spurs in Opener

The Phoenix Suns went into San Antonio and gave up 50% FG shooting, 32 points each to Duncan and Parker, played a balanced offense early then went to a heavy dose of Nash and Amare late and even saw Tim Duncan take a 3 pointer to tie the game in the final seconds.

Sound familiar? All except Timmy's three pointer clanging off the rim this could have been last year.

Except for the highly notable fact that the Suns went 10 deep and did something I don't recall any other team doing - the Suns second unit played together as a unit.

Normally we see bench players rotate in and out and mix starters and reserves together. Not Terry Porter's Suns. Aside from giving Diaw a bit more floor time then Lopez, the five bench players played together as a unit. And while they didn't blow the doors off they also didn't drive into the ditch either. They gave the starters good rest and kept the pressure on. That my friends is what they call depth. Get used to it. 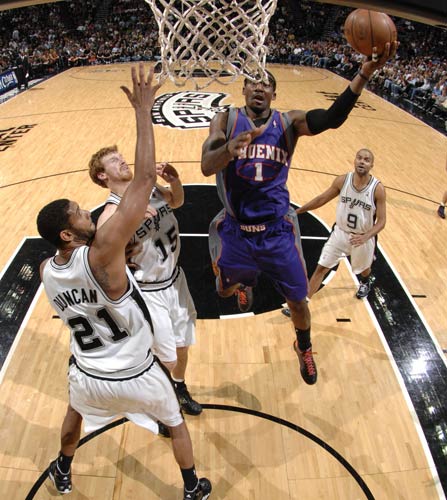 What we didn't see is a radically different offense from last year or really a much improved defense either. No worries here though. This was only game one and school is very much still in session.

Offense - A Tale of Two Coaches

With Nash on the floor things looked very much like they did at the end of last year. The Suns started by getting role players touches with Barnes getting some early looks and then feeding Shaq in the post. Nash was driving the ball into the lane and looking for his mates.

And just like last year, when the game was close in the 4th quarter Nash and Amare started running the old pick and roll and/or gave the ball to Amare in isolation. And you know what? It's pretty darn hard to argue to 11 points in the 4th quarter and 8-11 shooting. Is that guy a stud or what?

So while the starters seemed to be back on the D'Antoni plan, the second unit was Porter's team.

Hill wisely was running the offense taking pressure of rookie Dragic in his first game. Diaw was highly aggressive in his minutes and shot 50% and had a sweet dunk. Yes. Dunk. Diaw dunked the ball.

We even saw a glimpse of the Porter motion offense in the second unit's play. Guys were cutting and moving without the ball and we saw Barbosa catch and shoot curling off screens. The same exact play the Spurs run to get Finley shots. Oh, and it also looked a lot like the staggered screens the Pistons run for Rip Hamilton.

We saw a little of the new and a lot of the old leading to 103 points with 49% FG and 40% 3FG against the Spurs defense. The Suns had 5 players in double digits with Diaw and Barnes just under that mark. Rebounding was a tie and the Suns lead in FTA's.

That is a solid night in anyone's book and not your run and gun Suns. Oh, except for that highly efficient shooting and balanced scoring.

Maybe the Suns did manage to keep the best of the old? We shall see.

Defense - A Work in Progress

In the sideline interview on ESPN after the 1st quarter Porter was pretty happy about holding the Spurs to 16 points. I am guessing that giving up another 82 from then on didn't float his boat.

There were some things that looked different including the effort to collapse in the paint and then hustle out on rotations. I don't want to get too down on the Suns D in the first game and you can't worry about Bonner taking 3's or Duncan hitting every open jumper he had. But this is not yet the Suns D that we are going to need.

The Suns (Shaq) were still exposed on the pick and roll by Parker (who can be as unguardable as anyone) certainly seemed to be having one of those nights. At least both Lopez and Shaq put him on his ass a few times when he came into the lane.

Balance For The Win

The difference in this game and between those two teams tonight was clear. The Suns were able to spread the shots around and keep the Spurs defense back on their heels. And when the game was tight it's nice to have Mr. Nash and Mr. Stoudemire to lean on late.

The Spurs on the other hand needed two outstanding performances from Duncan and Parker to even keep it close. If either of those guys are slightly off the game is a blow out. And even with their great performances they both had to work so hard all game long they didn't have enough left in the tank in the closing minutes.

Nice win. We will see the boys again tomorrow against the Hornets. I can't wait!