Wake up Raja - The Suns Aren't Built to Run

Share All sharing options for: Wake up Raja - The Suns Aren't Built to Run

The Suns big men are lobbying for one style. Center Shaquille O'Neal maintains that championships are won from the inside out and would not mind getting about 15 shots every game.

The Suns perimeter players are lobbying for another style. Shooting guard Raja Bell, who was scoreless Wednesday, says the Suns are built to be a running team and are playing with uncertainty.

This is one of the few times I can recall disagreeing with Coro and having some question about the creation of a false controversy.

There is no divide. The Suns are not built to run as Raja told Jerry Brown in the EV Trib. Those days are gone and everyone except Raja gets that. I have yet to hear any other Sun raise this issue.

Sure, there are struggles with learning the new system. There is a growing process going on. That's to be expected. Work in progress. But only one Sun seems to be actively fighting against it.

What's more, Raja himself isn't exactly Monta Ellis on the break. The man cannot finish at the rim. Or near the rim. Raja would do well to ditch his complaints and remember that he's a (supposed) defensive player that shoots spot up three's.

The new Suns are trying to be a defensive oriented team that runs the ball through it's two post players who will kick out and create open spot up three's.

What's more, Coach Porter has said the Suns should run on defensive stops and at times this year they have.

As long as Shaq is on the team and his role is to control the paint and rebound (which he has been doing well) then it would be fool hardy to run the big man off the court like the Suns used to do to the Heat.

Perhaps when Tucker is back healthy Raja might be more worried about fighting for minutes and his coach's favor then fighting against the tide.

Valley of the Suns Blog comments on the lack of Suns jersey's compared to Cardinals fans. I am not going to get into the Cardinals but I would say that the jersey wearing at Suns game increases in inverse proportion to how close to the floor you are. I think that blogger's seats were too good.

Terry Porter is going to be honored by the Trail Blazers and have his jersey retired. I think Ben and Dave at Blazer's Edge and their huge rabid community made this happen all by themselves. Congrats to Terry. 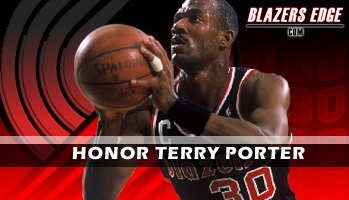