Share All sharing options for: Energy Solutions consumes yet another NBA team, 109-97 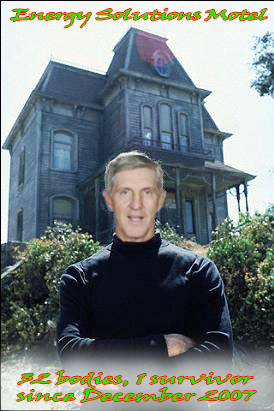 Energy Solutions Center is now 32-1 since December 2007.  After a slow start, the Utah Jazz won each of the last three quarters and the game after going a pathetic 1-4 on a East Coast road trip.  Although AK47 and Harpring were back for the game, the Jazz were headless without D-Will.  They were also without long bomber, all-star substitute Mehmet Okur, but it just didn't matter.

What is it about Utah at home?  Is it the clean living?  Is it the rims?  Can anything explain a 32-1 home record, 1-4 road record out east without Deron Williams followed by the thrashing the Suns got?

Rebounds were the story of the game, as the Suns marginally outshot the Jazz, but gave up 21 possessions in the rebounding category. Amare and Shaq combined for 9 of the Suns' 26 rebounds.  You better believe team rebounding drills should be back on the practice menu.

While turnovers were under control (12 for the Suns to 10 for the Jazz), fouls were a big problem for the Suns.  Nash and Barnes had 5, Bell and ONeal had 4.  Give Amar'e the shiny gold star for only having two, but he pulled some D'Antoni Defensive moves to do it, falling back out of a play to avoid a foul as a player came in for a dunk.

I still contend that the team needs to get better at playing tough and dirty, but doing so more discretely.  Many of the calls were attempts to do what the Jazz or Spurs do, but they were fouls committed so obviously the refs felt compelled to call them.

Offensively, the Jazz seemed more crisp in their ball movement, cranking out 28 assists to the Suns' 19.  Nash got his and Shaq got 5 off of some nice feeds from the post to cutters under the basket.

Some of our team looked shockingly old.  Shaq was the worst.  At one point, AK47 blocked a Shaq dunk twice in a row and the Jazz eventually got the ball.  Shaq was blocked three times in all, all on dunks and couldn't get more than 1 rebound in 32 minutes.  Blocked!  Blocked twice!  Blocked three times!?!?!   1 rebound!?!?   Wishing Shaq got that suspension after all?   The plus/minus says it all:  32 minutes, -29 points.  No player is even close.  Grant Hill is second in the ignominous column with -13.

In short, an understaffed Jazz team channeling the evil energy of clean SLC living outhustled a possibly tired Suns team on the second leg of a back-2-back.

The body count is rising at Energy Solutions.  Need a Jazz exorcist.