Suns 2nd Unit - A Work in Progress By the Numbers

Share All sharing options for: Suns 2nd Unit - A Work in Progress By the Numbers

The storyline deep into the first week of the Suns season is becoming clear. Everyone is talking about it. It is either the Suns promise or problem depending on who you ask and which quarter of which game you ask it.

You shouldn't be surprised we are talking about the Suns bench since Coach Porter said they would play a major role this season. Nor should we be surprised that the bench has been inconsistent.

There are several bench related things I will talk about later but first let's explore this "opportunity for improvement" as the consultants who despise straight talk would say.

In this play which came during the bench's worst performance of the long season (2nd quarter against the Blazers) Diaw turns the ball over. On the possession just prior to this one Diaw got the ball in the post and scored easily on Travis Outlaw after backing him down 1 v 1 in the low block.

This time the Blazer's wisely run a double at Boris to get the ball out of his hands. Boris being Boris is happy to oblige any opportunity to pass out of a scoring position and promptly does so even though the double was really just a faint and his team mates weren't open. Turnover.

Watching this play though it was clear that the Suns and specifically in this case Barbosa weren't on the same page as to how they were going to react to this situation. Barbosa should have immediately rotated to the strong side after Dragic crossed the lane to give Diaw an easy outlet.

Instead LB grows roots at the top of the arc and when Boris rushes the pass he tries to thread it to Dragic. And unless he was purposely helping his rookie countryman look good, he doesn't see Batum who easily steals the ball. 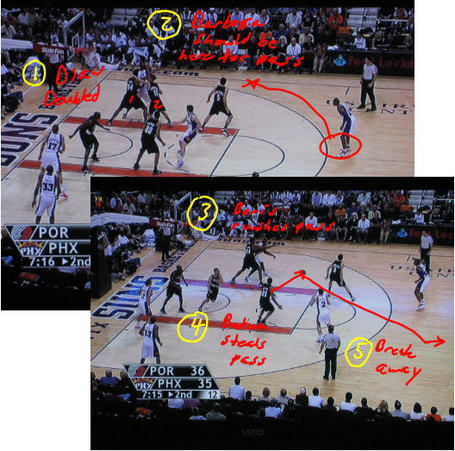 This play really stood out as an example of early season Work in Progress for a few reasons:

And has anyone else noticed how frigging awesome Amare looks so far?

Did you see the steal and break away dunk? Did you notice he's shooting over 64% and is averaging 11 RPG? How about that interior passing and overall hustle and the fact that he's not picking up fouls. 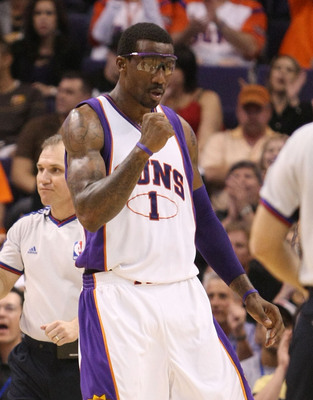 Amare certainly has dominance on his mind:

"I had my mind set that I wanted to dominate, I wanted to go out and dominate the third quarter to set the tone for the second half and I was able to do that with the help of my teammates. They were there to cheer me on and I just went out there to dominate. As a team we did that tonight during the second half."

And Suns fans, how does is it feel to be called big and physical and compared to the Spurs? That's some kind of change huh?

They were more physical tonight. It’s difficult to play back to back against big teams like San Antonio and Phoenix. - Rudy Fernandez