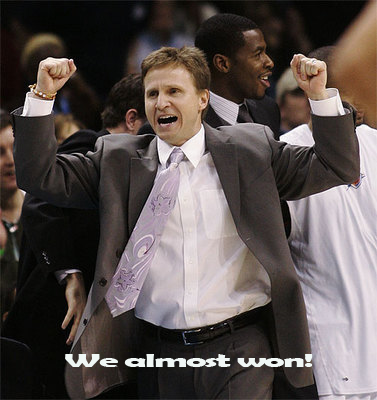 Watching the replay of a game like this, it's amazing that every exchange matters.  For example, closing the third quarter, da Thunda have the last shot, a kick out to Durant at the arc.  Durant makes the shot, but his toe is on the line so it's a two instead of a three.  There's a few seconds remaining and Amar'e races the ball down  Amar'e has only attempted two other three's this season, both way back on November 5th and missed both.   He gets to the 3-point line, shoots at the buzzer and makes the 3.

The Suns close out the quarter down 81-70. Now if Durant gets credited with the 3, or Amar'e doesn't make the 3, all bets on the outcome of the game are off.

The Suns go on to win in the 4th with a combination of strong offense (29 points) and strong defense (allowed only 17 points).

"If that's wasn't the dagger, I think the blacksmith is sharpening it.... The Thunder, serving notice tonight."

Amar'e impersonates Marion by making a critical non-scoring play in the clutch - he blocks a drive.  The block induces a 24-second shot clock violation, Scotty Brooks argues the timekeeper was slow and 1 second remains.  You don't get those calls when it's the home timekeeper at fault.

Nash hits a 3. Timeout. 95-94.  Bud Light gives the player of the game to the whole Thunda team, excluding Johan Petro.

Wilcox defended by Amare.  Wilcox misses but Westbrook gets the rebound and the foul. Misses 1.  Makes the second.

Nash with the ball. Shoots and makes the mid-range jumper.

Watson to Wilcox in the paint for two.

Nash draws the defense and then dishes to wide-open Barnes for 3.

99-98 Thunder with the ball and 21 seconds to go. Durant shanks it with 17 to go, Westbrook rebounds, misses, out-of-bounds to Phoenix.  Thunda foul Nash but had one to give.  The Suns are, implausibly, able to run out the last 8.3 seconds by passing the ball around.  Chalk that up to inexperience on the Thunda's parts.

It was vintage Nash in the clutch, down 6 and two minutes to go against an inexperienced team, scoring 7 quick points and assisting on the other 3.  Of course, without all the stops, those points would not have mattered.

It's hard not to believe the Suns didn't come ready to play and the boxscore shows that the Suns clearly got shocked in the second quarter and then had to waste precious energy to comeback from 16 down.  The must have took my "college team" reference too seriously.   I'm going to have to give a lot of credit to the Thunder team, if only because I don't have enough vitrolic bile in my belly to roundly criticize the Suns team for making their opponents look like the Lakers.

The Thunder look like an enthusiastic team, energized by the coaching change just two games ago.  The played open, selfless basketball.  Earl Watson did a partial impression of Steve Nash, penetrating and dishing to 13 assists without the turnovers or the scoring.  The whole team accrued 28 assists to just 13 turnovers, or better than 2 ATO.  In contrast, your sloppy Suns only earned 21 assists to go with 17 turnovers, painfully close to one turnover per assist.

The Thunder really got great contributions from Watson, Durant, Westbrook and Wilcox.  The team even out-rebounded the Suns 40-34.  They will be a nice team down the road and the management should be commended.