I couldn't think of a better title.  Ever since Point Break I've refused all Keanu Reeves and Patrick Swayze movies.  So, I've got no clever titles.

My main hope for tonight was to see the Nowitzki-dunking Trix and not The Dirty Trix.  After the jump, compare and contrast.

Before that, though, I'm still waiting.  The closest we got to a Shawn Marion Video Tribute was when one guy on Pumpkin Cam (where they show bald dudes with hugely elongated heads) held up a #31 sweatband.  Really?

Fortunately, everyone who was there when Shawn was introduced, stood up and cheered.  Funny thing about game times.  8:30 TNT starts always start around 8:50.  7 o'clock starts tip off around 7:07.  6:00 starts start at 5:59.  The PA guy quickly announced Marion, all 10,000 fans stood up and cheered, he waved and the PA guy skipped ahead to the next dude.

The worst part about that whole intro sequence was that when Shawn was announced, my wife said, "Hey, he's not in purple."  I therefore spent the better part of the first period explaining why he no longer did Room Store commericals and the KG-STAT-Shaq circle and wondering why Nash wasn't playing.

I was at that Dallas game, and it was in the new season shortly after they had eliminated the Suns in the WCF.  It was one of the coolest things I've ever seen.

Then, there was this (pic came out post-trade): 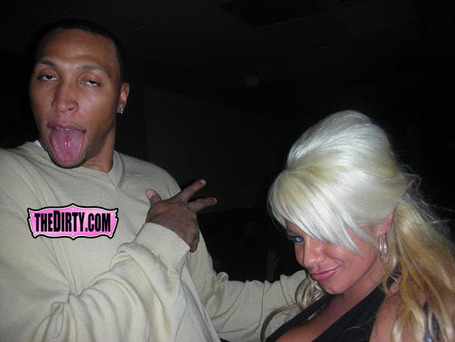 Dirty Quota met, ZF?Here's the thing with Raja:  If he can't hold D-Wade to under 30, why is he in there?  Barbosa can be just as ineffectual as a defender but still be of value to the team.  Bell is not valuable because he doesn't know his role.  He shot 50% from downtown tonight but decided to jack up 5 other shots, missing 4 of them.  As I was telling ZF earlier, the guy shoots 45% from the arc but 42% overall.  That means he shouldn't be doing anything other than waiting for a pass to spot-up for a jumper.

Here's the thing with the rotation:  If this was an important game, Steve Nash would've played.  I don't mind growing pains if I can see the point -- the light at the end of the tunnel.  I fear this light is just the train.  I could stand losing this game with Singletary and/or Dragic playing 30 minutes.  However, they combined for about 17 minutes.  Why?  Why have two defenseless guards in the game when neither of them can run the point?  At least let Dragic or Singletary get some burn and learn some lessons.

Here's the thing about Shawn Marion:  perhaps the most interesting matchup was Marion guarding Stoudemire.  For most of the night, Marion didn't seem to mind playing hte 4-spot.  Marion did a pretty good job on Stoudemire.

Here's the thing about Stoudemire:  He needs to assert himself more in games like this.  He does.  I'm not basketball-genius-guy, but I'm pretty sure that Stoudemire with the ball at the arc working his dribble penetration against Matrix is not the best use of his offensive skills.  Just sayin'.

Here's the thing about Diaw:  He needs more PT.  He also needs more touches on offense -- not as the playmaker, but as the finisher.  He can pass, but he's not a passer.  His passing works when teams are worried about him scoring.  He's playing well this year.  On defense, he seemed to be the only guy who realized that he man might try to make a run off the ball.  He therefore stuck with his cutter and his mark rarely scored in that fashion.

I don't mind losing a game.  I don't mind losing a bad game.  All I'm saying is that Singletary and/or Dragic should have been allowed to lose this game.  We already know that LB at the point is a bad thing.  We also know that the veterans cannot carry this team with Nash out.  Let's see what those kids can do.  That's where the Suns need the depth.  That's the position we need to develop for 2010 when Nash joins LeBron on Antoni's Knicks.