Lil Wayne is down with Amare MVP

Share All sharing options for: Lil Wayne is down with Amare MVP

I might be the most un hip person in North America (except for this Canadian guy) so I was surprised when Urb Magazine contacted me to point out that I have something in common with hip hop icon Lil Wayne.

After I figured out what Urb Magazine was, I was happy to learn that Mr. Lil and I both think that Amare will be the next MVP. 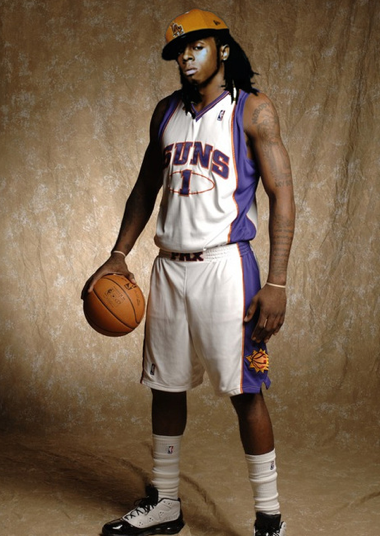 He even threw up a def music jam about it...
"I come through the lane and straight dunk like Stoudemire/Amare reminds me of I-uh/He's a Phoenix Sun and I am fire"
That's straight dope right there.
Here's more from Wayne's season previews because you haven't read enough season previews until you've read the definitive word from Lil Wayne. Word up yo.

If the Phoenix Suns earn homecourt advantage for the first round of the playoffs, Amare Stoudemire will win the MVP. If Shaq and Nash each play at least 60 games, STAT will easily win the scoring title. That’s certainly a lot of Ifs for an aging team with a new coach and system, but Amare has always found a way. And now that dude is wearing goggles? Expect a career high in both points and blocks, especially when that new coach is defensive guru Terry Porter. Despite the knee injuries, Amare’s first step is still explosive…and when complimented by an ever-improving outside game and Shaq’s presence (however decaying), expect STAT to be unstoppable in 2008-2009 and crowned the MVP for his efforts.
Bottom line: As a Suns fan, this writer has no choice but to make this prediction.