Check out their coverage at 3Q Collapse.

The Magic have somewhat quietly found themselves in the first cloud of elite teams with the Celtics, Lakers and Cavs. Dwight Howard, averaging a godlike 21 points with 14.5 rebounds and 4 blocks, anchors the team. Rashard Lewis, contract aside, is playing well. Hedo is clutch. Ben Q Rock argues that Jameer Nelson is a quality NBA PG:

...Nelson averaged 17.6 points, 3.3 rebounds, 5.3 assists, and 1.4 turnovers on 56.3% shooting. Nelson's Pure Point Rating during those 8 games was 6.8, a figure which would place him 9th in the league (behind only Chris Paul, Jose Calderon, Rondo, Chauncey Billups, Baron Davis, Jason Kidd, and Chris Duhon) if he maintained it for a whole season.

I have the very real sense that the Suns haven't lost much but baggage. I'd be ready to see them play the rest of the season with just the people on the roster now, sans J Rich and Dudley. One of the good things about the trade is that JRich is much more re-tradeable than Bell or Diaw. We have enough players on the wings. Shaq can QB when Nash is out. Admundsun is a different player than Diaw, but thankfully he can be productive without the ball. The Bright Side knows we don't need more stars, egos or drama.

It's unclear who will come to play today, but we hope Steve Nash is one of them. I expect for him to play things out as a pro, to re-equilibriate and find joy on the court. There's no question in my mind the Nashster is on his way out, his traction in the organization is slipping away. Steve Nash is the last meaningful piece of the Colangelo Suns. And the last in the waterfall of changes from owner, GM, coach and players. I would love for him to stay, but I don't think the organization loves him nearly as much as I do. F them for that. Really.

Besides Nash, JRich and Dudley have physicals scheduled for Friday and Shaq has his great-grandmama's funeral in NC on Friday as well. They could all make it in time for tip off, or they might all not make it at all. We still wait on the return of Alando Tucker, although with the hot play of other wing players, it's not clear when he might actually get to play. 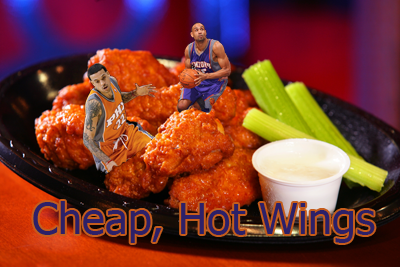 Speaking of those hot wings, rental players Grant Hill and Matt Barnes are playing sweet and spicy hot right now, that's somewhere between 3 mile island and 911 hot on your Hooter's Menu. They combined for 48 points, 17 rebounds, 8 assist to 4 TOs and got 4 steals all from the wing position. Grant went 9-11, making all his midrange shots and missing 2 of 3 threes. Barnes was 10-20 and 5-11 from 3.

I want Anthony Olivieri's head on a platter.

The truth is, the sun has set on the fun set in Phoenix. This group is more likely to turn to ashes than to rise from them.

but he is correct here:

"I know personally when it happened to me and one year Clyde (Drexler) got traded it was like an era was over," Porter said. "You just have to re-group and finish out the season."

Not much of a pep talk.

Is Nash Done in PHX?

This poll is closed