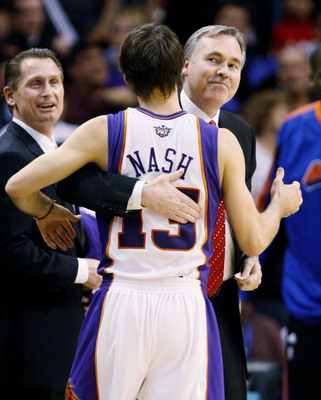 First of all, I'd like to thank the fans for giving that great ovation to Coach Mike D'Antoni - it was the right thing to do despite all the qvetching in the last week.  No doubt that positive karmic energy aided the Suns to their much needed win over the New York Knicks.

As we all know, the way to hurt a jump-shot team is to tighten the rims.  It works even better on a suspect jump-shooting team like the Knicks than a good one like the Suns, since a good jump shooting team gets nothing but net.  However, the real advantage to hard rims is having thunderous dunkers like Shaq and Amare to power it from the inside.

The rims must have been superhard this time (within NBA tolerances of course) because the Knicks shot an unbelievably awful 5-for-37 from beyond the arc.  Thanks mainly to that anomaly, the Suns had a pretty easy win, although the game tightened considerably at the end.

Again, Nash was clutch.  It's nice to see him energised and back to his old tricks.

D'Antoni After Knicks Loss to Suns 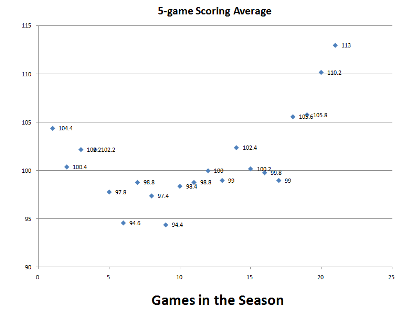 Nate Robinson is a Bonafide Hustla

Who knew?  Isaiah Thomas knew, but we automatically discount anything he knows as wrong.

5'9" Nate Robinson is a legit NBA player, not just a circus gimmick worthy of Nellie.  You know Nellie would treat the NBA to Nate Robinson-Manute Bol pick-and-rolls if he could turn back time on the old erector set of a basketball player.

Bad shooting night aside, Nate still led the team scoring 27, grabbed 9 (nine, nueve) rebounds, had 3 steals and was blocked only once (1, uno, eince) in 27 shots taken.  Overall, he's second on the team according to 82games, and 12th among 66 point guards in the league as computed by PER.  He's not just scraping by in the NBA, he's better than average.  Seriously better.

There's a new (sub-)matrix in town 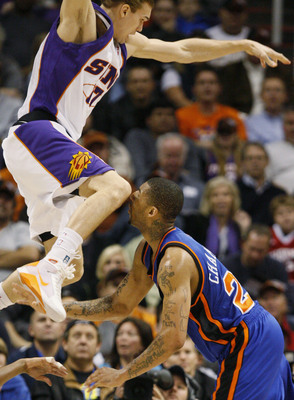 I know Rasta Diaw is going to be great as a starter in Charlotte.  He scored 25 tonight in a 4-point loss to the Hawks.  However, watching AmundSun play, I don't feel bad about it at all.  AmundSun does generate a lot of stats, but watching the game you can see he is all over behind the boxscore.  Boris has more talent, but AmundSun is the better role player.  He's better for the price but I would argue that stats aside, AmundSun may be the better role player straight up.  Besides, AmundSun simply doesn't frustrate me with his play like Diaw always had.