Share All sharing options for: Bright Side Breaks Top Ten!

You are a sports fan right? You know about being competitive even when you are too old, too weak or too lame to actually compete in sports. You probably find some other way to let your competitive juices flow. Maybe darts. Or gambling.

When I got into blogging I certainly had NO intention of it becoming a competitive outlet. But then they had to go and keep score. And you KNOW what happens when someone starts keeping score on your ass....you COMPETE!

Well my friends. We have done it.

We have CRACKED THE TOP TEN of ALL NBA BLOGS!!!

AND we are number 3 in dedicated team blogs!

I would like to thank my wife for not sleeping with me. My co-authors for covering my ass. And you dear reader for clicking and loving!

But mostly I would like to thank The Phoenix Suns for bringing the Most Drama in all the NBA! We would be nothing with you. 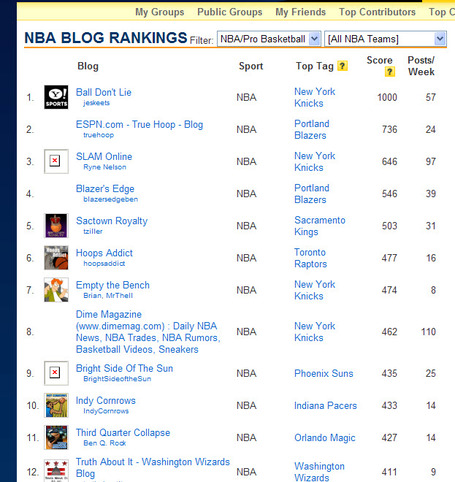 Just in case it doesn't last I took a picture

A few hours later the high has worn off and I realize how obnoxious this bit of self aggrandizement is.

And not that I don't think we are doing good stuff here and having fun "covering" the Suns, but really - how is it that we are ranked higher then so many other great blogs.

Ben at 3Q Collapse covers the shit out of the Magic. Ryan and Co do amazing stuff over at Hornets 24/7. And any rating system that has the great GSOM at #30 is clearly flawed. There are tons of other great blogs and these guys clean our clocks on a daily basis.

Not to make excuses, but it was a rough day with the Clark Kent Job and a few drinks after delivering some bad news to some great people left me a bit vulnerable to seizing on what is really just blogotrivia. Sometimes in a storm any good news can be used to sooth a damaged ego and dilute feelings of guilt.

The world is a nasty place right now and many people are struggling just to keep their families in their homes. A few more are hurting today then were this morning and so I think it's important to remember that the world of professional sports is a fantasy land for the vast majority of us. Through blogs like this one we can escape from our daily reality and extend the fantasy a bit longer.

There's nothing wrong with that either. There are certainly more destructive ways to escape from reality then following a sports team. But there's also no need to promote one's ego at the expense of others.

I considered just deleting this post but the fact is the collective Bright Side of the Sun community has done well. We deserve some praise. Zona Flash, JSun, PanamaSun, Mike and everyone that comments or even lurks on this site makes it was it is.  So thank you all and let's continue to kick some ass!