Phoenix Suns star forward Amare Stoudemire, responding to repeated rumors and mischaracterizations of his previous statements, denies that he is leaving Phoenix.

Asked after practice on Monday about the repeated rumors that he might leave the Suns when his contract expires in 2010, Amare explained that his focus is to improve as a player and as a team.  "We are going to continue to grow and continue to get better." 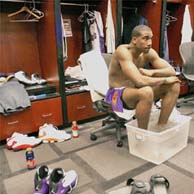 Pushed to clarify his previous remarks in which he refused to rule out the remote possibility that he might perhaps follow in the foot steps of 90% of NBA players who don't play their entire career in one city, Stoudemire paused to chew his gum a few times and explained to the media members present that he was not Nostradamus and that he lacks the power to predict the future.

This shocking lack of foresight prompted the media to report that Amare once again refused to pledge to remain in Phoenix beyond the term of his current contract or his natural life span (which ever comes first).

Breaking further news, Amare while claiming that he loves his team mates states that things have in fact been "kind of difficult". It is not clear if he was referring to on the court troubles such as the high turnover rate or perhaps he was signaling deeper locker room strife.

There have been unconfirmed reports by anonymous sources that Steve Nash repeatedly has been seen tying together the shoelaces on Amare's wingtips and that Grant Hill once spiked Amare's warm foot bath with ice.

ed note - I never fail to be surprised with how the media can twist a simple answer into something else. Fortunately for you dear readers of this blog you can listen for yourself to how Amare is asked these questions and how he responds.

Bright Side of the Sun - breaking through the mainstream media filter.

Tell me media consumers, who displays more editorial integrity: the journalist who turns nothing into a headline and story by reversing the order of a few quotes to make them fit a predefined narrative or the blogger who hears the same words and recognizes the lack of news and doesn't report anything.