The Nuggets are easily the most improved team in the West this year and it started when FireGeorgeKarl.com somehow convinced both the coach and players that they needed to stop playing street ball and focus on the defensive end and play something resembling professional basketball.

Even before moving AI for Billups in what has to be the best trade of the season so far, the Nugs were looking much improved. Heck, we even saw it in the Indian Wells game when the Kings of NBA Tattoos were really focused on the defensive end. It showed.

This raises an obvious question. If George Karl can get Melo and J.R. Smith to play defense why can't Porter get that from Amare and the Suns? The Enver Nuggets are 4th in opponents EFG% while the Suns are 18th. Do the Suns need more ink?

For the Suns this is yet another big measuring stick game against a conference opponent stationed above us in the standings.

Offensively, the Suns have a big hieght advantage in the paint against the shorter (but powerful) Denver front line. This is yet another game where feeding the ball to Shaq makes sense. If he is one (hitting his 3ft hook shots) then I would be happy to pound it down low until Karl is forced to double or Nene and KMart are in foul trouble. Then I would pound it to him some more.

The other clear area of advantage for the Suns will be JRich on Don'tea Jones and J.R. Smith. 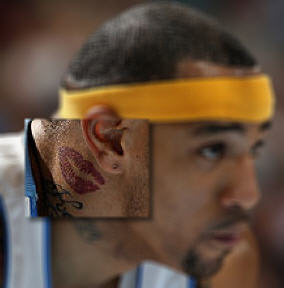 On the defensive end we actually match up pretty well against this team. Hill and Barnes on Melo is about as good as you could hope for (aside from LeBron who held him to 13 points last night)

Shaq and Amare should have the advantage in the paint and as great as Billups is, he's not the kind of guard that abuses Nash. We might see Billups try and post Steve up but I would look for JRich to swtich assignments and take care of that and/or solid weak side help from our bigs.

Our biggest weakness of course is the pick and roll defense with Shaq. KMart and Nene both will look to pull Shaq from the paint and put him into tough cover situations. Shaq should continue to hang back and make the guard shoot over him. Against the Nuggets, I think you can live with that result. Barring that, we will see heavy doses of the 2-3 zone as well.

Rotation-wise, I look for Barnes to play the 4 alot tonight and look for a medium sized line up of Amare, Barnes, Hill, JRich and Nash. With most of the second unit time going to LB playing with Shaq, Hill and some combination of Barnes and JRich. That unit looked very solid against the Blazers.

This is still only game 4 of Suns v3.0-2008 and so far while all the gears still aren't in synch the one thing that is a huge plus is the energy and chemisty. I look for another energized and happy team on the floor tonight. Love will conquer all.

Be sure to check out the awesome SBN blog - Pick Axe and Roll.

Michael over at Valley of the Suns @ Fanster.com makes a great point:

Fans should expect a quick game with the Nuggets among the fastest teams in the NBA in pace factor and the Suns doing some pushing of their own of late.

Even if Michael is a Wildcat homer, he's solid on the Suns.