As rumored and preferred by this site's readers, the Suns have signed point guard Dee Brown to a non-guaranteed contract. In the process, the average age of the Suns dropped by .4yrs to 28. 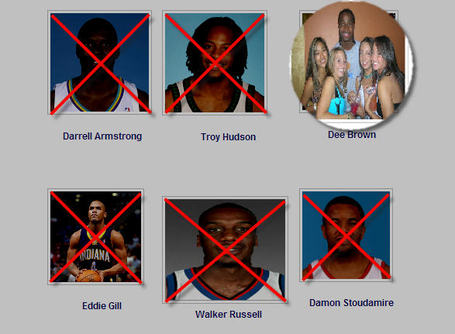 Dee Brown brings the Suns a solid work ethic and defensive tenacity along with reasonable NBA experience in Washington and Utah. Brown was drafted in the 2nd round in 2005 out of the University of Illinois. Illini fans seem to be thrilled with the pick:

Awesome news Dee!!  He deserves to stick with them this time.  Looking forward to watching his famous one man fast break in Phoenix!

The best part of the pick aside from having a guy that come in and log minutes at the point if Nash goes down will be listening to Eddie Johnson brag on his fellow Illini. You know we are in for a full on love fest from EJ.

Brown, despite what this picture might imply, brings a great reputation and was a fan favorite in Utah and Washington for his hustle and work ethic.

The Suns signing Dee to a non-guaranteed contract means they can release him before the January 10th deadline. Starting on the 5th teams can sign players to 10 day deals. So, this means the Suns might just release Dee before the 10th and resign him to one (or two) 10-day contracts if they aren't sure about him or more likely if they think they have a shot at Janero Pargo. If Dee remains on the Suns roster on this contract past the 10th he will likely finish out the season here.

Probably the happiest fan (outside the Illini alumni) is Mr. Cut Goran Dragic. It is hard to imagine that the Suns won't send Goran to the Iowa Energy to get some much needed minutes. As we've said, the Suns are far too invested in (and obligated to) Dragic to dump him.

Hopefully, getting minutes on a regular basis in the NBADL will help Goran figure out the US game and build his confidence. The Suns still believe in the kid and are saying that he's shooting well in practice and has great vision and with enough time will develop into...well, I don't think they are talking about him being the next Nash...but perhaps he can be a solid backup PG by next season.

You can drop Dee a line at his web site or myspace page. Send him a drink or flowers or whatever it is you kids do on myspace and welcome him to Phoenix.

Does' Amare have his own song?