Ed Note: This special version of a holiday favorite is brought to you by Bright Side contributing author Mike Lisboa who's poetic beauty was bound only by the limits of buggy technology.

The following is posted on his behalf...

With apologies to Henry Livingston, Jr or Clement Clarke Moore, here's a very seasonal preview of the Suns's Christmas Day tilt with the Spurs. Enjoy.

Twas the night before Christmas, and throughout Planet Orange,..

Everyone was excited, even poor Goran.

The gameplans were made by Coach Porter with care

And Steve Kerr signed a point guard with ‘rows in his hair. 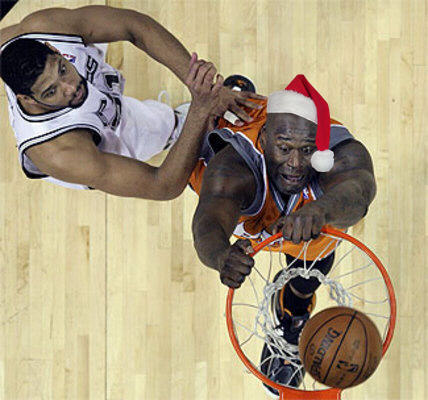 The true fans were nestled all snug in their beds

While visions of Spur-trouncing danced in their heads.

And Boris with his Dirty and Raja with his ‘tude

Had been shipped off to Charlotte for a long winter brood.

And in their place arrived with such chatter,

J-Rich and Jared (who has yet to matter).

But that new guy Jason can shoot, dunk and slash

Who cares about defense? Certainly not Nash.

But the Spurs were coming, almost at full strength,

They would miss poor Oberto and all of his length.

When Timmy and Tony and Manu appear

The Suns better kick it, and into high gear.

With a slow start, the Spurs looked so old and so sick

But we've seen it before, this same possum trick. 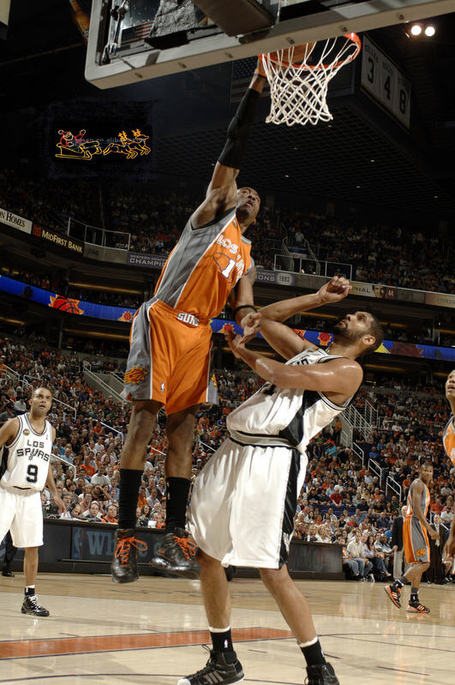 But the Suns know it too, they've seen that old game

And Coach Porter, he lectured and called them by name:

You won't learn my system, not a bit, not all!

In Terry's slow vision, the Suns, they had struggled

D'Antoni's boys had gone from magic to muggled.

At last he relented and loosened the reins

And poof! - disappeared those growing pains.

And then up in Portland, the Suns found the fun

The passing and shooting, that old run and gun.

Though Brandon went off and the Suns they were downed,

You couldn't help but think, "Have they turned it around?"

There is much work to be done, they haven't quite gelled;

And those questions on defense? They're still not disspelled.

So the Spurs come to town to give them a test

With apologies to the Lakers, they own the West.

So old Shaq must be aggressive, bodying Tim

And ensuring his foul shots don't clank off the rim. 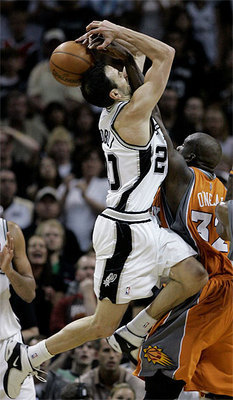 And Steve Nash must take charges, however ignobly.

J-Rich needs to find his man on rotation

And LB needs to play without consternation:

Why sometimes he looks scared, just petrified like wood.

Matt Barnes and his tats are a poor man's Shawn Marion

But I like his style as long as his 3s he's a-buryin'.

Cuz these Spurs rebound, and collect them in hoards.

I hope Dee Brown's ready, poor Goran is not:

Send him to Iowa to work on his shot.

And fro-hawked Amare should play with some fire;

His hot and cold act is sure growing tired.

So tune in on Thursday, it's gonna be a blast,

And hopefully the Suns will be left standing at last,

For a yuletide Suns win would allow me to yell:

"Happy Christmas to all! (May the Spurs rot in hell.)"