Share All sharing options for: Porter rips into Amare in 4th - 5 boards result

Sitting in the upper deck for this game I never had the feeling that Amare was really in the game. He ended the first half with only 5 boards and was repeatedly beat down the floor by his man resulting in easy layups or fouls for the Jazz. I saw him get beat out for loose balls and get outworked on the glass by Milsap several times.

So I was surprised to look up at the end of the game and see that he had 20 boards. It didn't "feel" like a 22/20 domination. It felt like some balls fell his way and some he took away from his team mates after a Jazz miss. Overall, my insta-reaction was that it was just a so-so game from Amare and nothing like some of the dominating performances we've seen from him this year on the defensive end like the game in OKC when he single-handedly shut down the Thunder in the fourth quarter and allowed the Suns to make a come-back.

Sometimes  you can play your ass off and get 6 boards and sometimes the ball can bounce your way and you end up with 20. I wasn't sure what this was so I came home and watched the game on Tivo and found something interesting.

At 5:23 in the fourth quarter Amare had 15 rebounds. Not a bad total but he still was getting beat to the ball and was not playing with the kind of energy and hustle we need to see from him. He wasn't being aggressive on the offensive end either and looking to initiate the action. 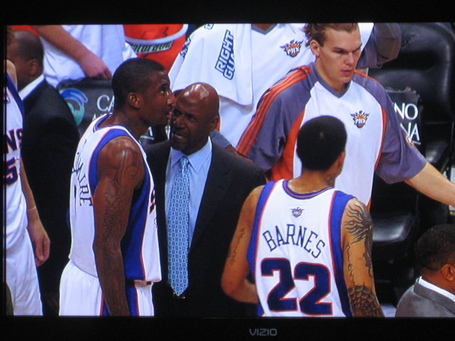 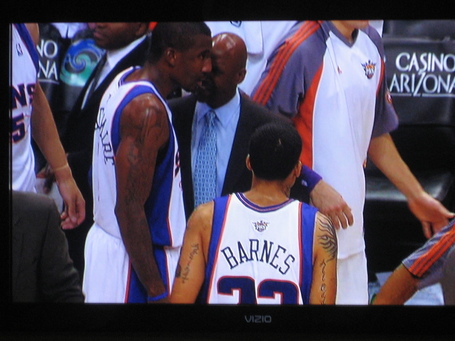 If you need more proof that Amare didn't have quite the game his rebounding numbers would indicate, consider that his +/- was a -4 in 39 minutes of a win (Diaw was a +7) and he was 4-9 from the line. When Amare is missing free throws it almost always means he's not focused and into the game.

The good news here is that Porter was willing to rip into him publicly like this and Amare seemed to respond. The media is all over the 22/20 performance and Amare will likely feed off that positive response.

In fact he said after the game, "I had my focus on getting rebounds all night telling Mr. Cartwright that I was trying to get the rebounds and looking at my negativities and improving on them. When I do that it helps better the team.”

Let's hope Amare builds on his strong close but there is no way I am ready to give him props for this game.

The Suns offense seemed to go back to the early season plan and didn't continue the flailing about we saw in the past few games.

There were some beautifully executed sets in the half court including several well designed plays for Shaq in the post that used multiple cuts and screens to free up players and allow Shaq to using his passing skills to create from the low block.

The Suns also were very effective at running Barbosa off some down screens curling up and around the elbow and getting him into the lane with his man trailing.

And once again we saw the fantastic three man game with Nash and Amare running the high pick and roll with Diaw trailing which allowed him to get into the lane and create or score. In fact the biggest adjustment in the offense I saw was the way Boris and LB were being used to take advantage of their skills in the half court.

The down side is the turnovers Boris had 4 and Amare had 5 and that's too many. Some were just silly mental errors and others like Nash throwing the ball to were he thought Amare would be will improve.

Most frustrating was the several times that the Suns failed to convert on Jazz turnovers either giving the ball right back or failing to convert. I am thinking the Suns actually need to work on their fast break more especially if they aren't going to wait for Nash to lead it.

Between these missed opportunities and horrendous three point shooting from Bell and Nash (combined 0-10) this game should have been a blow out.

Still, it was a solid win against a good team. A loss (especially if the Suns had blown a 5 point lead with less then a minute to go) would have lead to fans leaping off the upper deck in frustration.

Don't forget to check out SLC Dunk for their take on the game.