Yes folks, we have a winner.

Out of all the tremendous entries (I have to give credit where credit is due) we were able to select the one Mad Lib to rule them all. 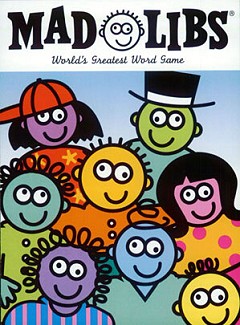 The disinterested Phoenix Suns managed a lackluster victory over the NBA’s red-headed step-child, the LA Clippers. After playing turgidly in the first half the Suns lead evaporated and were tortured by Marcus "Cotton" Camby who had rebounds coming out of every one of his lame Asian-writing Tattoos. In the second half the sequel didn’t happen.

Without ageless wonder Grant Hill the outcome might have been a disaster wrapped in a debacle. But in the glorious shadow of the mighty Shaqtus’ PERFECT Free-Throwing, the Suns were extraordinarily lucky to escape with an undeserved win.

We expect Coach Porter to be spouting unprintable, and yet colorfully entertaining obsceneties with the outcome of the poorly executed, completely un-necessary, and yet tragically watched by me until the final buzzer played contest.

The Suns were coming off a big win over the Mavs and their performance today is indicative of a 12:30 tip-off in front of 30 bored fans after a night of quasi-illegal and definitely immoral activities with Hollywood’s finest local talent, and could mean absolutely nothing more than 1 game in the win column.

The LA Clippers, for their part represent the absolute dregs of the bottom of the barrel in the NBA. They are a pitiful, cursed, wretched example of a team that is a victim of truly horrid ownership and management buffoonery that accrues bad karma like Shaq-ovic accrues nicknames, and quite frankly, flat-out blows when they aren’t setting new standards of suckagenessery. In the future the Clippers fans have many more decades of sub-20-win seasons and are always a lock for a Spring date in Secaucus and the Draft Lottery to look forward to.

Clippers fans follow their team for the following three reasons:

2)They’re playing the Danny DeVito role in "Twins", opposite Laker fans role in the Governators part.

3) A strange cult of obsessed Penny Marshall/Frankie Munez fans uses the unsold seats at Clipper games to hold get-togethers, hoping for a shot at glory with their chosen heroes. The fact that an NBA game is going on is completely coincidental…

There were some other great offerings but this one was the most consistent. If I had time (or cared enough about you people) I would do a best of Mad Lib taking the best response from each blank. That would be awesome! But not awesome enough to spend two hours on. Sorry.