Share All sharing options for: Good times! Suns down Hawks 107-102

It was a good game like you might expect from two good teams.The Suns clearly had the advantage with home court and having Al Horford out.

Make Peace with the TOs

I've made peace with the turnovers.  17 TOs per game is your new Phoenix Suns, just like getting grossly outrebounded every game was your old Phoenix Suns.  Don't fight it, accept it.  We also had 26 assists with only 6 by Steve Nash and everyone passing.    The team is playing unselfishly and that's most important.  I'll take 26 assists to 15 TOs instead of 10 assists on 8 turnovers.

However, posting up the Lou-natic is just cruel and unusual.   That's 3 TOs that didn't need to happen.

I don't know about you, but I thought both Richardson and Hill did a good job on JJ, with some helpful team defense.  I was surprised that superthin Grant Hill was able to handle JJ.   Grant and JR's ability to defend give us some hope to slow down the big and fast SGs of the league.

I would like to presume it was the team defense on JJ that explains the poor frontline rebounding relative to the Hawks lineup that picked up 18 offensive rebounds.

The Amare Initiative Continues to Phail

The Amare Initiative is falling apart.   Amare played well.  He played like a solid role-player.   Get used to it. 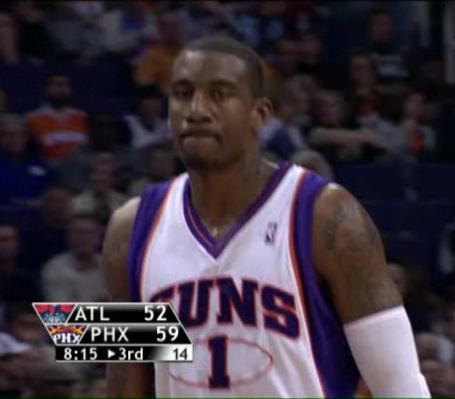 He made some great plays, dishing and defending.   Amare on a lackluster night is like Boris Diaw on a good one.  And tonight, Amare played like Boris tonight going for 17-5-5 with some good D thrown in.  He also played like Boris in that despite his good play, something about it just frustrated me.

I get the sense that the team really is not interested in whether Amare succeeds or not.   They are exposing him as something less than his individual accolades as an All-NBA player, MVP candidate, and the Suns Black Jesus.   Remember the subtle things Steve Nash would do to limit players in Jack McCallum's book?  He'd make his passes just a little late.

I don't want Amare traded, but it seems to me like he just cannot get out from under the dominant players and personalities on the team.  It's not fully his fault, but I think he is being wasted as a max player on this team.  By the time the old vet generals Nash, Shaq and Hill have gone, Amare will be 30 years old.   If Amare has to fit in by playing like Diaw, then perhaps we traded the wrong player.

Credit to STAT for having the maturity to keep his mouth shut in the Q3.

In other good news, Darius Miles scored 13 in 13 minutes of his NBA comeback, a Grizzlies loss to the Cavs.  Insurance companies everywhere are sharing the savings with David Stern over cocktails.