Tell me you aren't geeked up to see Amare and Boris go at it tonight?

Despite all the Amare frustration and the extended trade him, or bench him, or holy crap they voted him in over Dirk discussion this has the potential to be a classic battle between two guys with something to prove.

More likely however it will be train wreck between two guys that often can't get motivated enough to lift the toilet seat before their morning pee.

Either way, you can't not watch.

Then there's dear Raja Bell who from talking to Dave at Rufus on Fire sounds like has turned it around and is back to playing with fire and passion. Doesn't that just piss you off as a Suns fan after all the crappy attitude and giving up on the team? 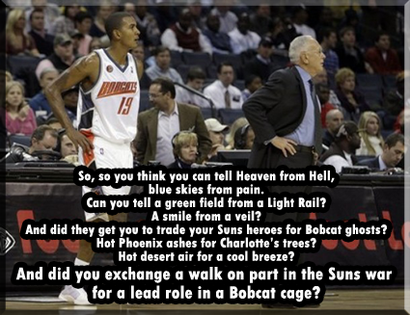 Image is another Zona Flash joint