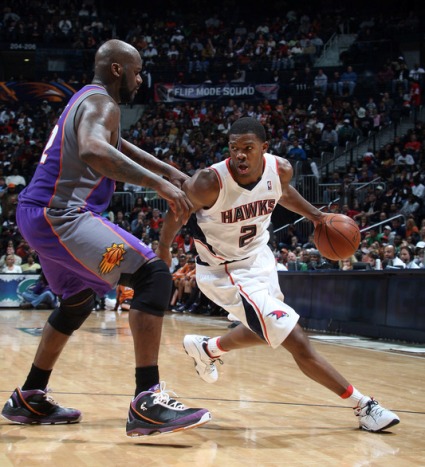 The ailing Suns swept the Hawks with a highly suspenseful game that involved clutch long range shooting, loctite defense and a little help from the other team.

The game started exactly as I hate for it too, with a bunch of jumpers.  At least ours went in and we were up 20-5 in no time.  That lead was gone in no time as well, thanks to 14 first half turnovers, Amare preset for phail and a poor transition game.  Amare got credit for 5 TOs, bobble a few to give Nash a few TOs as well.  Four of Amare's TOs came in the first quarter!  It's damn hard to win a ballgame when you spot the other team 20 extra shots.  It's wonder we ever win, taking 65 shots to the other team's 85.

Not only is the Suns transition defense atrocious, their transition offense had a few hiccups as well.

The game end with suspense.  Tied at 95 all with 5:02 to go.  Barbosa had hit one critical three, Shaq nailed 2 crucial free throws, Amare was to come to life and get some And-1's and Barbosa hit another clutch 3.  Meanwhile both teams bobbled the ball with travels and missed shots in the presence of respectable defense.  Still, the Suns settled for a bunch of jumpshots rather than going to the hole.  Many of those shots rattled in and out.

The JRich transition boondoggle aside, overpassing seems to be a real problem with the team, particularly in the congested paint area.

Bibby and Johnson still struggling. Bibby is in a funk and missed a lot of open shots, but credit JRich for some solid defense on JJ.  JJ was still good for 13 assists.  These guys helped us look good, going 7-for-33 and 2-for-13 from 3.  Yikes, that's cold enough to freeze a bottle of vodka outside my front door!

Amare vs. Josh Smith, Shaq vs. Zaza Amare did get 23 points, but compared to Shaq's efficiency of 7-for-9 shooting, Amare needed 17 shots to get there, the most on the team.  Phoenix Stan's grandmama outrebounded Amare, as did everyone else including Grant Hill and Jason Richardson.  Amare's sorry first half play shaped up in the second half.  Matt Barnes got the same number of rebounds as Amare, but in half the time.  We saw flashes of Amare's hibernating gorilla game near the end.

Josh Smith, on the other hand, took up his teams slack, with 12 rebounds and leading the team with 19 points on 18 shots.  Josh also had some authoritative highight dunks.  Zaza, who had earned my compliments for solid play in the last matchup with Shaq was abused and embarrassed this game.  Because Shaq doesn't take lightly to players defendng him well one-to-one, he put 5 fouls on Zaza in 17 minutes.  Poor Zaza only had time for 3 rebounds while being beat on by Shaq.  So much for my compliments of Zaza's defense from the two teams' last meeting.  Zaza, you have been outed by Shaq.  You are an impostor.  You're fired!

Poor Josh Smith had to pick up Zaza's slack.

Surprise!  Barbosa!  Barbosa really played well tonight.  He made 7-for-10 with 3-for-4 from beyond the arc, including the two critical long bombs at the end of the game.  The one miss from beyond the arc was a 35 foot buzzer beater.  He also picked up 3 steals and his only TO really hangs on JRich.  Hard to find fault with Barbosa's play this game.  We really need him to play well and tonight he was the POGNNS (Player Of the Game Not Named Shaq).

Summary  Overall, it was a much needed win against a quality team.  But we are not out of the woods and 1 quarter from Amare does not a comeback make. 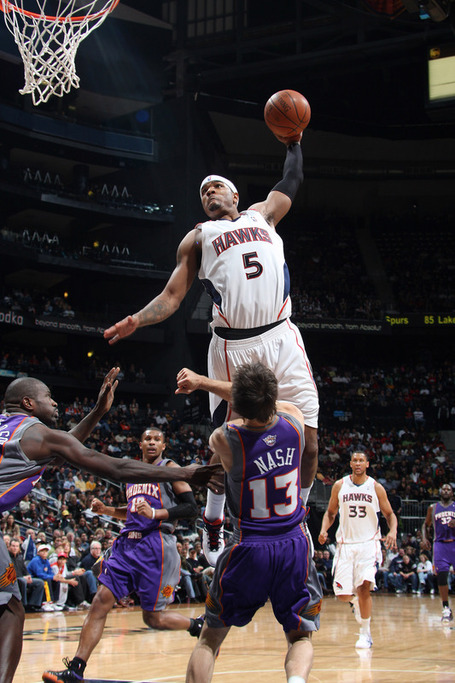 If you are going to give up the dunk, get called for the block, be humiliated, posterized and have the deck wiped with your ass, make sure you at least give an elbow-shot to the groin.  What a mad dunk by Josh Smith.

Check out this mid-4th quarter defense, from the Phailure to Communicate file.  Both Barbosa and JRich moved back to pick up Solomon Jones (44), then stumbled and staggered back to the perimeter, assuming the other guy had Jones.  Jones had all day to make that dunk, no one was even in the paint when he caught the ball. 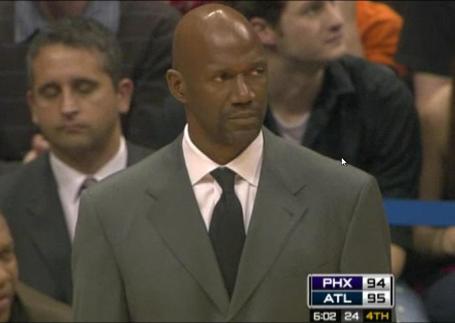 He's got a good poker face, but he's thinking, "WTF, we are trying to win a game here."