Share All sharing options for: Wizards conjure up Amar'e in Suns win 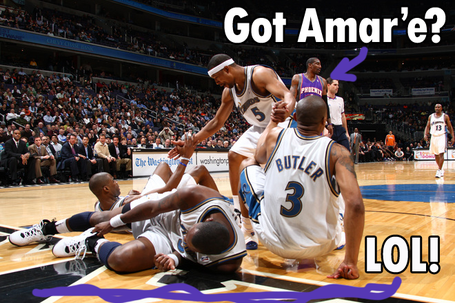 It was pretty clear early in this game that the Suns were going to win. The score was much closer then the actual game as the Wizards stayed in it by making some fairly contested shots or hitting from outside while the cold shooting Suns rode The Big Horse down low.

The defensive effort and hustle was clearly lead by two guys who aren't exactly known for that part of their game. Amar'e and JRich seemed to recognize that the tired old men were going to need a hand and they both delivered with exceptional efforts.

Richardson couldn't buy a bucket but managed to make his presence felt on the glass (7 rebounds) and in the little things he did with deflections and weak side help in the lane. This often left his man open for jump shots but that's how the Suns roll these days.

They are going to trade high percentage paint points for jump shots and generally that's a winning formula. The Suns outscored the Wiz 56-28 in the paint despite only shooting 40% in the first half.

People who don't watch the Suns don't quite understand the difference between Amar'e when he plays the way he did tonight and the Amar'e who's been sleep walking through the last few weeks. It really is night and day. When he's on like that the Suns are a very good team which is why his being off is so frustrating.

I don't expect 15 rebounds every night but I do expect that effort. Amar'e needs to man up and play his game and stop worrying about whatever the hell has been in his head. See a shrink. Punch your pillow. Whatever. Just show up and play like this every night and we won't be talking about trading you for a bag of peanuts.

Terry Porter certainly agrees: "He was good tonight and he did a good job of attacking the offensive boards. That is exactly what we need. We really need his presence on the boards."

Let's also not forget to mention our two elder statesmen. While the competition wasn't exactly Tim Duncan and Chris Paul, our center and point guard took advantage of what was in front of them and willed their bodies to deliver.

Player of the Game goes to Leandro Barbosa who followed up a solid performance in Atlanta with another tonight. His young legs and solid shooting allowed the Suns to pull away in the fourth as the Wiz did their typical last inning swoon. His numbers weren't the best but he was timely and increased the lead in the 4th while Nash was resting. With he and JRich playing this well it is going to be impossible for Tucker to get minutes. Barbosa really needs to be on the floor 25 minutes per game and that's a pretty difficult task as it is.

Anti-player of the Game goes to Matt Barnes. This guy is seriously pressing. Its gotten laughable now as he not only keeps jacking up poor shots but acts like he should be getting more. Barnes is destined to be replaced by Dudley in the rotation who at least understands that his job is to help the team and not make things worse by firing up brick after brick.

Other interesting player on the other team. Javale McGee looked pretty good in 20 minutes of play. He was much better defensively then I expected. He sure put Robin Lopez to shame. I am still waiting for him to spend some time in Iowa improving his game. He's certainly not getting any better sitting on the bench watching Lou Amundson be the first guy off the bench.