While we keep a careful real-time monitor on the GM Steve Kerr's Moron Meter here at the Bright Side of the Sun, it seems to me that we should also keep an eye out for his predecessor, the alternative hypothesis. Bryan Colangelo is the right benchmark comparison, since he is the GM we could have had for life, the guy that would have likely still been the GM had Sarver not wanted to push him out in favor of the disastrous pairing of no-GM D'Antoni and ghost-GM Griffin and had Steve Kerr not been ready to seize glory on the cusp of a championship (a la Pat Riley).

Bryan Colangelo is a good GM. Despite being fathered-in, he's earned his stripes and cannot be compared to the GM impostors hiding out in the league's front offices.

However, Toronto sinks like a depth charge down in the standings and 14.5 games back after playing only 30. While Bryan Colangelo is a two-time NBA Executive of the Year with huge turnarounds in Phoenix in 2005 and with the Raptors in 2007, failed plans have this year's Raptors back in the cellar, just as Chris Bosh is nearing the free agency sweepstakes. I'm waiting for that sinking depth charge to explode.

"Bryan's in a panic," said one general manager.

Chris Bosh is playing great, but where's his support?

In light of recent events, I've had to re-evaluate my sacred personal history of the Phoenix Suns, my mental tome of unquestioned Suns dogma:

Here's his record in full detail, from Hoopshype. Looking at the spotty record from 1995 to present, I don't know what is bad luck and what to blame on swashbuckling trades that were a bit too daring. There are a lot of gambles in there, and the few that panned out resulted in dramatic turnarounds. However, dramatic turnarounds may get you Exec of the Year, but a few lucky trades are not sustained team success. There were a few good years in the Suns 1995-2005 era, but many bad years as well.

Drafting lemons and bad luck trades aside, the main problem is, I now realize, that it is hard to assess the different contributions of a front office. Unlike players, whose contributions can be captured in a box score or by looking at team performance on and off the court, front offices cannot isolate contributions. Coaches, GMs and owners are not swapped in and out of trade and draft decisions, and they actually change rather infrequently.

In looking back at his career in Phoenix, I cannot disentangle BC's moves as GM from the choices his father, Jerry, made. For instance, BC's best move in 14 years as a GM was to draft Amare Stoudemire in 2002, according to Hoopshype. But it would be hard to credit Bryan for selecting Amare in the 2002 draft when it was Jerry that said, "This is our guy." More here and here. Bryan's worst move listed was trading Jason Kidd for Stephon Marbury. Do you really believe he was the one that pulled the trigger on that trade? What in Bryan's years as Suns GM can be rightly credited primarliy to him alone?

On the flipside, Torontoans can fully and completely thank Bryan quite readily for Andrea Bargnani, who was drafted ahead of Brandon Roy and LaMarcus Aldridge as the second coming of Dirk Nowitzki. Mitchell didn't make that move. Neither did the owner. All over the internets today, we hear that Bargnani is now on the trading block. That's the definition of EPIC BUST.

Paul Coro gives a great summary of the team:

Toronto was a team on the rise with a Coach of the Year winner (Sam Mitchell), fringe MVP candidate (Chris Bosh), a No. 1 overall pick (Andrea Bargnani) and the addition of Jermaine O'Neal.

Toronto is a team that fired Mitchell, keeps shuffling rotations failingly and probably would trade just about anyone beside Bosh or Jose Calderon. After a Friday win, the Raptors are 13-20 with five wins in the past 18 games.

I come to the conclusion that assigning any glory or blame to Bryan Colangelo for his past successes or the current failures of the Toronto Raptors is to overstate his contribution. The owner, GM and coach are all to praise or blame for the goings-on in Phoenix and in Toronto, regardless of who gives and who gets the pink slip.

With Bryan Colangelo no longer on his pedestal in my Suns pantheon, I realize that I'm fine with Steve Kerr as the Suns GM. This doesn't justify the way Bryan was treated in is departure, but it does allow me to see that matching owners, GMs and coaches matters.

The sharpest difference in styles between Kerr and BC can be seen in the handling of Shawn Marion. The Colangelos solution to the problem would have been to shower the Matrix with money and pamper him with perqs. The Colangelos would have never let Joe Johnson walk, either). And Marion would have been happy. If necessary, Bryan would have found some way to offload Marion's max extension down the line if necessary. But Bryan's liberal use of salary contracts to keep players happy just wouldn't fly with the fiscally conservative new owner. Instead, Kerr appears to operate as a straight shooter and has delivered fairly decent results under these constraints. I can respect that. If Shawn Marion couldn't handle the truth, then it's on him (and his machiavellian agent whose soul is going straight to the 8th circle of Hell).

So, in light of Toronto's condition, Phoenix Stan, I ask that you assign one Genius Point to GM Steve Kerr. 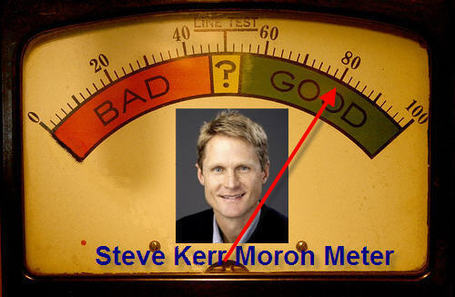