Nice Comeback, but Nobody Home

After dragging behind the Pacers for 3 quarters, the Suns cast off the rust and roared through the fourth 24-15 to tie the game with 35 seconds to go. After some see-sawing back and forth, it came down to a tie game, Pacer ball, 0.9 to go and Granger got open to hit the three.

As discussed, Suns players were supposed to switch on screens, but LB did not, leaving the deadliest Pacer open for the game winner and the career high.  Stuff like that happens and for Granger to win it with 0.9 is all credit to the Pacers.  A nice win for the Pacers and Pacers fans everywhere.

While Granger's career high (yes, another one) 37 was awesome, I felt it was Troy Murphy's threes in the 3rd quarter that really hurt the most.   Chronically, the Suns seem never home on the shooters.

On a different note, the Pacer frontline really hurt us not only with troy Murphy's long ball, but also with Foster and Softy Rasho going 9 of 11 for 18 points.  Who was defending that soft frontline??

Rusted Sunz, Green Power and Guess Who is packing their bags to Iowa after the jump! 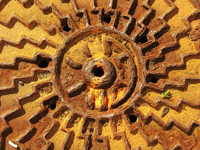 Hey, the final score was a bummer, but this game was a good one to work out the kinks in the rusted Suns.  This has only been the Suns fifth game in 21 days.  There was a lot of good individual performances (just check the box scores), but the Suns were clearly out-of-sync and there was talk of Nash not being well enough to play this game.

The Suns did in fact play hard enough to win this one, outrebounding the Pacers by 10.  They aggressively made good at the foul line, with 24 more attempts.  However, they simply had an uncharacteristically poor shooting night.

I don't think this is a bad loss and I'm not going to lose any sleep over it. 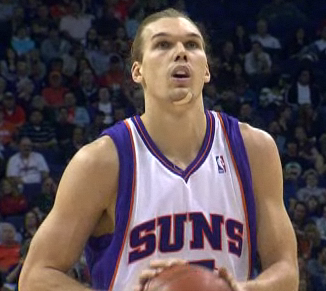 He may not make his FTs (1 of 7??), but he comes in with huge energy and does all the dirty work needed to win.  9 offensive and 14 rebounds in 25 minutes.  We are lucky that our team found this player.  We have enough stars.  Credit to coaching and management for giving this guy a chance to play.

Lou Amundsun is this year's Jamario Moon, an older energy player that has found his way onto a team and into the hearts and minds of NBA fans.

I would recommend a genius point for the GM having found Lou Amundson had Foster and Rasho not also gone for 9 of 11 from the field.  We'll have to wait to see more as to how Lou pans out.

Barnes, despite shooting 2 of 10, was also a game-changer with his aggressive energetic play.

SunDolphin is waiting for Robin Lopez at the Iowa Airport.

The starting rookie centers Hibbert and Fropez played, like, rookies. Hibbert played for less than 8 minutes but really didn't get credited for much.  Fropez played less than 6 minutes, accumulating 4 fouls to go with his blocked shot and 2 of 4 free throws.  He didn't get a rebound.

After being widely advertised as "Not Fit for Suns Play" Fropez started the game and further proved that Coach Cartwright isn't enough - he needs serious time in the D-league.

We would have a seriously short upfront lineup with Robin in the d-league during games that Shaq shits, but 5:19 minutes of play and 4 fouls is not much help anyway.