Share All sharing options for: Suns not speaking the same language - defense

In the spirit of getting better assigning blame let's break this one down.

First though, listen to Terry Porter after today's practice talk about the failure to communicate.

Remember also what Nash said after the game last night about someone calling an audible right before the ball came in. I still assume that was Richardson.

Here's the way they lined up initially. 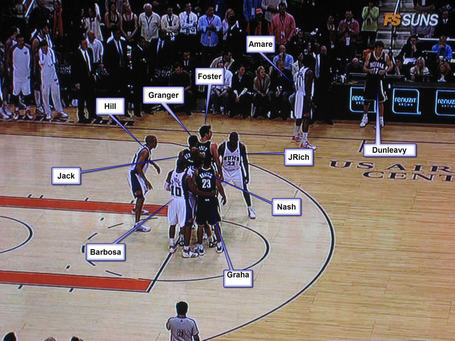 The Suns went with 3 guards (Nash, Barbosa and JRich) along with Hill and Amare. One has to assume a play to be guarding against is something going to the rim for a tip in or alley oop. That's why Hill is out of the stack a bit protecting the hoop.

It does say a lot about how Amare is viewed that as the most athletic big on the team (and on the court or pretty much anywhere) he's left guarding the ball. Think about that. Would Duncan be on the ball? Wade? LeBron? At least Amare does a good job shading to protect an easy pass towards the hoop. Of course the Pacers had other plans.

Some question having LB or even Nash in the game at this point instead of Matt Barnes. That's an interesting point as well. 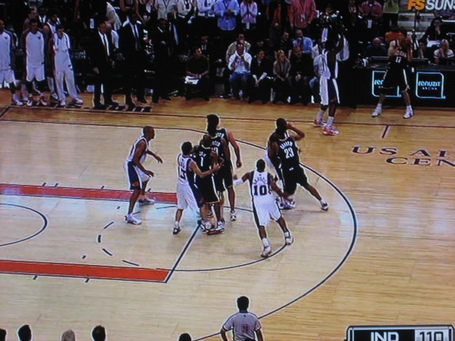 In the first move before the ball comes in, Graham breaks and JRich steps out and intercepts him. At this point you can clearly see Barbosa trailing Graham but still a few steps away with time to stop and focus on Granger.

Nash is lined up behind Jack (a legit threat too) and Hill is watching for someone breaking to the rim. 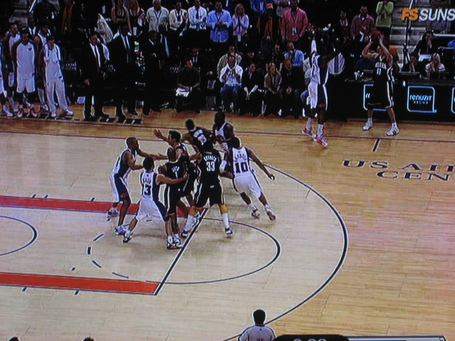 Now we clearly see Barbosa continuing to trail Graham as is JRich. Nash is positioned on Jack with Granger left open. At this point the break down is complete. 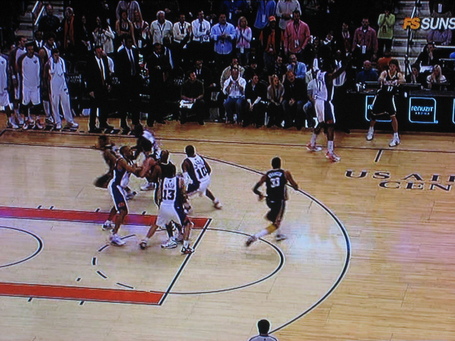 When Granger breaks out to the three point line no one is even close. Barbosa had continued trailing Graham as had JRich. Only after the ball clearly is going out to Granger does LB stop and look. Too late. 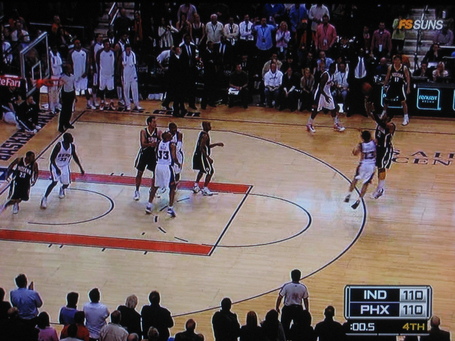 Granger catches, lands, elevates and delivers. You can see Nash has left Jack and closed a lot of ground to even be near Granger. I read somewhere that Nash got burned on this play but that was CLEARLY not the case.

There was also no question about the shot going up in time although the clock did start a couple of ticks after the catch was made. Still it wouldn't have made a difference since you can see .5 remaining when the ball leaves his hands.

Here's a link to the youtube. I've seen it enough times.

Barbosa, not known for the mental part of his defensive game, and Richardson newly aquired to the Suns obviously got their wires crossed here. Going just on the video evidence it's clear the Barbosa failed to follow the "switch everything" edict from Coach Porter but per the Nash audio clip it might be that JRich changed the play on the field. Either way, there was yet another Suns failure to communicate.

all audio provided by Sports 620 KTAR