With news today that the Suns will be signing Courtney Sims to a 10-day contract, I am re-posting the interview I did with him 10 days ago. If you listen to the interview, Courtney understands that his role will be on the practice floor and to be a good team mate.

He's not expecting to come to the Suns and get 20 minutes. That said, I think if he impresses the coaches during practice he should be able to get some floor time backing up Amare at some point during this contract.

I don't know for sure if the Suns can continue to sign players to 10 day contracts, release them, wait two weeks and repeat or if at some point they will have to sign someone for the rest of the  season. I do know that they can only sign any one player to two 10-day contracts so this will be Courtney's chance to show that he's ready. He's playing for another 10 day and then will hope that he's managed to make himself unreleasable with his play.

The other side of this is that I fully expect (with no confirming sources) that Robin will now go to Iowa to work on his game. It will be very telling how well he does at that level compared to Sims. They are different players for sure with Sims having more LaMarcus Aldridge like skills while Lopez is more of a traditional post center. Robin should however get plenty of blocks and rebounds which is what we will be watching for if/when he goes to Iowa.

I had a chance to chat with Courtney Sims of the Iowa Energy today (the Energy yesterday beat the Mad Ants and increased their league leading record to 10-3).

Courtney is putting up monster numbers in the D-leauge and is very likely to get called up at some point this season by an NBA team.

Here's a very recent scouting report on Sims from the experts over at Draft Express who were at the NBADL Showcase event in Utah that's just wrapping up.

It’s hard not to take notice of the amazing numbers Courtney Sims has been putting up in the D-League so far. Through 12 games, he’s averaging 23 points, nearly 13 rebounds, 3 turnovers and 2.8 blocks in 40 minutes per game, shooting an outstanding 58.5% from the field—making him the #1 rebounder in the league, the #2 shot-blocker, the #3 scorer, and #2 in PER.

Already a per-minute monster last season, as you can see in his advanced stats profile page now he’s doing it for entire games.

Courtney spent four years with the University of Michigan Wolverines and went undrafted in 2007.  He spent a bit of time with the Pacers last season and was in camp with the Hornets this year.

With the numbers he's putting up (including a triple double) he is likely to get a call up at some point this season. He's a solid shooter with a 77% average from the line (which he says was 80% until a few days ago) and likes to attack off the dribble but can also shoot out to 18 feet to go along with the rebounding and shoot blocking. Sims is 6'11" and says that he's currently weighing in around 245.

He seems to understand and have a plan for what he needs to do when he gets the opportunity but also recognizes that he could stand to get a bit stronger to battle with the speed and strength that he would face at the NBA level.

I think he'd be a great 10 day signing for the Suns letting Robin Lopez get starter minutes in Iowa so he can get himself ready for the stretch run where the Suns are surely going to call on him at some point. 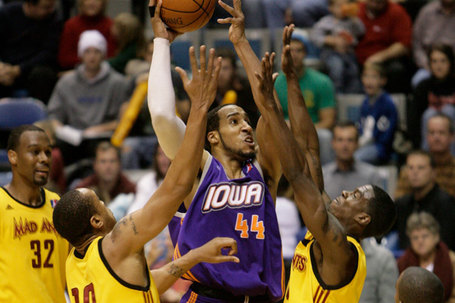 Courtney in talking about his game see's himself as face up power forward who models his game on David West and Tim Duncan.

He's aiming high not only looking to get into the NBA but to some day be an all-star.

We've certainly seen countless examples of guys that have worked hard in the developmental league and turned into solid NBA contributors including Stephen Graham who the Suns saw last night put up a solid effort for the Pacers.  If Courtney doesn't land a roster spot in the NBA by next season I would be shocked if he doesn't sign for decent money somewhere overseas where a offensively skilled big man who can rebound and block shots would certainly be in demand.

Whether Courtney makes it to Phoenix, which in reality isn't very likely unless Steve Kerr and David Griffin decide to ask my opinion, we wish him the best.

Click the big play button to listen to the interview.