My day as a professional basketball player, a D-league tryout story

Share All sharing options for: My day as a professional basketball player, a D-league tryout story

Throughout my life many things have changed for me. For starters, the TV show that used to be the end-all be-all of television (Gilligan’s Island – I loved that show when I was little) has now become only my second favorite show about people stranded on an island trying desperately to get home while, at the same time, trying to adapt to their surroundings.

I’ve also gone from using a computer maybe 5 times throughout my entire HS career to absolutely, positively, without it I would probably cease to exist relying on computers every day of my life. Seriously, I can’t even remember the last time I went an entire day without getting on a computer at least once (my guess would be my wedding day 5 ½ years ago).

However, through all of the changes, there has always been one constant…one answer to the question "what do you want to be?" My answer when I was a kid is the same as my answer now (just because it aint going to happen doesn’t mean it can’t still be my ultimate goal, right?), I want to be a professional basketball player.

I have been blessed with a 6’8" wingspan to go with my 6’3" frame…you know, the type of arms that are only useful to ball players and apes, NBA 3-point range, and since the year 1999 I’ve been a card-carrying dunker (for those who don’t know you have to get at least one in-game dunk each year to renew your "dunker" membership).

My HS career went well enough…I wasn’t always happy with my minutes and felt that I was underutilized on more than one occasion but as a player you just got to play, right? In college I made an attempt to play JuCo ball but was stopped short by a hernia and later by…well I got married and priorities changed.

After that, I sort of accepted that my basketball career was going to be lived out playing in rec leagues and pick-up games.

Then, about six weeks ago, our own Phoenix Stan came to me (via twitter and email) and stirred up new illusions of grandeur when he A) asked if I would participate in the Iowa Energy (the Sun’s D-League affiliate) open tryout to which I originally replied, 'maybe 5 or 6 years ago' and B) told me that he was already on the path to getting me in. Here is a small portion of his email to the Energy coaches:

"We will definitely be covering this and in fact one of our writers is a 6'4" (I’m actually 6’3" but you know how teams exaggerate that sort of thing) former dunk champion at like the JuCo level (I have won three different slam dunk contests but that was a long time ago) who's also 28 and not exactly in top game shape but we were thinking he could participate (until he pukes) and then write about it from an insiders perspective (which is what you’re currently reading)."

With that, I was in and the coaches were clear not to be expecting the next Michael Jordan.

Basically, if I could make it the whole day without puking it would be considered a success. On a personal level, I had six weeks to go from playing for a couple of hours a week on a ¾ size court to being ready to go full out at a tryout with dudes a lot younger, bigger, faster and stronger than me!

Over that period I ramped up my training a little bit (probably not as much as I should’ve) and tried to prepare myself both mentally and physically (aside from the extra court time I gave up my weekly trip to Cici’s Pizza for the usual 14 slices) to be sure that I treated this last shot at pro basketball the same way I would’ve treated it 6 years ago.

Finally, this past Saturday, the tryouts came.

I arrived at the gym along with the some 40 other hopefuls ready to go at 9 AM and I’m not going to lie to you, I was NERVOUS!

Now, I knew I wasn’t going to make the team and knew that I had nothing to lose and had low expectations but I was nervous all the same. The morning started simply enough, just a little bit of stretching and some light passing and shooting drills then it started to amp up when we ran some full court passing drills. Then, the tryout was on. They split the participants into four teams - there were two teams that were clearly the A teams and two of the next tier teams –I was put on one of the better teams. Now, I have three theories as to why this happened:

ersonally, I like to think it was the third scenario, but I digress. Once the teams were split up we started running some full-court transition drills. These drills are meant to expose the kind of shape the players are in as well as their defensive instincts/abilities in transition when the offense has numbers.

It was during these drills that, in my opinion, I played my best ball of the day. It was still early so my legs were feeling good and I was moving well – my favorite moment came when (after hitting a three the previous possession) I got the ball and drilled a second straight three over a dude who had a good two – three inches on me.

Anyway, we ran these drills for the majority of the morning before our "lunch" break. After the break, we stretched and warmed up a bit more, split back into our teams and ran games for the rest of the afternoon.

The games consisted of a 4 minute layup line/warmup period and two 8-minute halves with a one or two minute halftime break. After which you would rest and watch the other two teams play a game (A teams got to run three games and other teams ran two).

This is where I got in trouble…see, at this point in my life my legs don’t bounce back like they used to and in our second game I noticed a steep drop in my ability to defend the younger quicker dudes at the tryout.

When it came time for my team’s third game, there was a player from the other game that the coaches wanted to see run with the A teams and I was kindly told to head to the end of the bench – that I would not be playing in that final game. With that, I watched my team lose it’s final game and my day was done.

When asked what he thought of my performance at the tryout here’s what Iowa Energy Coach Nick Nurse had to say:

"I thought Dustin held his own just fine in the tryout, even had some big moments hitting back to back three's early in the camp. He was in pretty decent shape too and had a great attitude in the camp.  It was fun to coach him."

Okay, so it’s not the professional basketball contract that would’ve been the best-case scenario but it’s better than "Dustin puked and quit within 25 minutes of the first drill," right? As for the tryout, there was some good competition as well as some poor competition. I went in fully expecting to be the worst player there but was surprised to find that I was able to (as coach said) hold my own against the best players at the camp and that I played as good or better (again, in my own opinion – Phoenix Stan may be able to confirm or deny) than a number of other guys out there.

From what I saw, there were probably five dudes that have a shot at showing up in the D-League and possibly even moving up at some point in the future. Here is what Coach Nurse said about the overall competition:

"The overall talent was much better this year which is a good thing.  There were a handful of players that I would think have a chance to get drafted in November.  [We saw] great enthusiasm and effort by the entire camp.  We are really happy with all facets."

I felt the coaches did an awesome job at running the tryout in a way that allowed them to see which players were not only talented enough, but smart enough to play professional basketball. The tryout efficiently tested the endurance levels of the players as well as their ability to take in, retain and execute instructions. 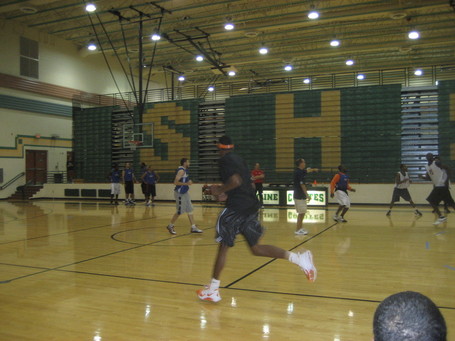 The best part of the tryout was seeing first-hand that the Iowa Energy has GREAT coaches who know how to get the best out of and develop players. Last season there were 15 call-ups to the NBA from the D-League and nine of those came from the Energy organization.

Suns fans, rest assured that our D-League affiliate has game. I have never been surer that it would be in Goran Dragic’s best interest to take a trip to to get some run.

I (as all Suns fans should) wish nothing but the best for the Energy organization and their coaches and players. As for me an my professional basketball career, well…judging by the fact that I am struggling to even move sufficiently to write this right now…I’d say this was the beginning and the end of my career. But rest assured, there is still only one answer that you will hear when you ask me what I want to be.

I only stayed for a couple of hours but I can definitely say that our man has got a little game and in my opinion deserved to get some run with the top 50% of the fellas out there. Those two three's he drained got Coach Nurse's attention.

Overall, I agree that there were 3 or maybe 5 guys that really had any kind of shot and they were head and shoulders above the rest. Literally.

One guy named Matt apparently played for Michigan State and was a 6'7" banger type who Coach Nurse told me averaged about 5 and 5 in his college career. He also might have had a camp invite with the Arizona Cardinals. While he certainly wasn't a highly skilled basketball player when you think about the guys at the NBA level, he was obviously an athlete of much higher caliber then most out there. Ever little thing he did on the court separated him from the rest even if it was just running a baseline sprint.

There was another guy that was about 6'7" that was wearing practice jersey from the Charlotte Bobcats and while he also had some skill his crappy attitude probably didn't impress the Energy coaching staff. There were a few other guys that clearly stood out but they either weren't athletic enough or weren't skilled enough.

All of that should remind us just how good the players are "even" at the D-league level. They may not be the "best of the best" like the NBA players but they are right there in that category while sadly, our own Dustin is destined to be a YMCA legend. Not there's anything wrong with that.