Before I begin this final installment of the Phoenix Suns Preview Series let us all pause for a moment of non-silent reflection on the fantastic work that has come before. I will surely fail to live up to the incredibly high standards set by my co-writers in Parts 1 through 4 of the series.

In case your Internets were on the fritz and you missed any part of the previous Parts, here's the linky links

Like the 2009/10 Phoenix Suns trying to recapture the glory of those who've gone before, I now bring you the Final Wrap Up to our Season Preview Series. After all, it takes a village to preview a team.

There's two basic ways to look at this Suns season.

1. You can choose to see a team trying to recapture the glory years by returning to its running roots but doing so without key players (Marion, Diaw and Bell); with an older core (Nash and Hill); and with whatever Amare may or may not be able to give on a micro-fractured knee and an eye that almost fell apart.

To put it yet another (even more cynical) way, if the Suns aren't moving forward towards a championship and they aren't rebuilding for the long run then they are basically treading water in a desperate and blatant attempt to sell tickets while delaying the inevitable collapse.

2. You can see a team that is hitting the reset button after making the Big Mistake and promising to return to Phoenix Suns basketball which was exciting and won a lot of games. A team with great chemistry and a promise of consistency (no trades) and a team who will release its Canadian hummingbird from the plastic bag and run like the wind. A Suns team that is getting better defensively and is deeper then at any point since Charles Barkley weighed less than Eddy Curry.

When you look around the league and listen to folks who aren't either contractually, genetically, or geographically required to say only positive things about the Suns, then there is plenty of reason for concern. These aren't haters. They are realists who understand that this roster has serious flaws and that the Suns chances of truly being successful this season are somewhere between slim and Amare's fragile health history.

Yet for the faithful followers of Ra there are also reasons to think that it won't require the sacrifice of small farm animals for this season to exceed expectations.

If you are a Suns fan and you feel yourself being pulled towards the dark purgatory of realism and are looking for the bright light of hope and you want to at least make the season enjoyable then recite these 10 incantations every day: 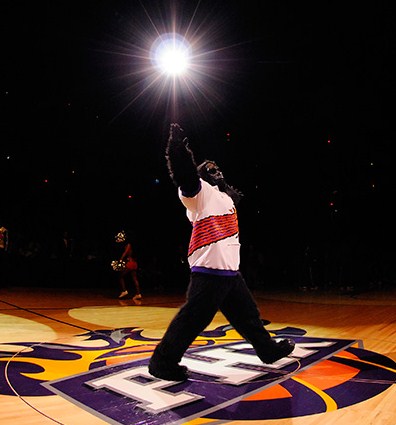 Because I believe in accountability here's last year's prediction which should give you even more confidence in what I am about to prophesize:

The Suns are walking a tight rope between bringing back their starting 7 and integrating a new coach, new system and new role players all the while trying to transition from the old vets to the future (hopefully) stars.

Don't be surprised to see the team start slow and look off kilter. I hope Porter and Kerr stay the course in the face of some rough times early and stick with the game plan of resting Nash and holding players - especially mega star dominant power forward(s) - accountable on defense. The West is tough and while I pray nightly for a Kobe fueled Laker's implosion I am not betting on it.

I look for the Suns to finish 2nd in their division and be a six or seven seed in April. That doesn't mean if they are peaking late and have learned Terry's lessons that they don't have a chance at making it back to the Western Conference Finals and that's more then I can say for 80% of the teams out there.

Once again the Suns very well could struggle out of the gate with no Robin Lopez, Amare still working his way back into shape, and a brutal schedule with 17 out of the first 26 games on the road.

I feel much more confident this time in predicting that the Suns can not only come out of that stretch at .500 but that they won't panic and start pointing the finger or making panic personnel moves if that's not the case.

If sports were predictable they wouldn't be entertaining and in that regard the Suns up and down performance this year should provide quite a thrill ride for fans. It is up to you to decide if you will scream and cheer on the up-slope and puke and rage on the down OR if you will maintain a steady poker face through out.

How you react to the ride is up to you but the Suns are surely going to provide the opportunity to both cheer and boo, often within the same game.

Hopefully, Robin Lopez can come back around Thanksgiving and provide some help. Even more hopefully, Aaron Nelson and all of your prayers will keep Dan Dickau from having to be called up for an injured Steve Nash. And finally lets all hope that Amare Stoudemire can return to form. That's a lot of hope right there but in the NBA calendar, "October" is called "Hopetober" for a reason.

If those things happen and Earl Clark settles into the NBA and can contribute solid perimeter defense and has a "do no harm" approach to his offense (which means laying off the jump shots) then the Phoenix Suns should make it back to the playoffs and at least give someone a scare in the first round.

Wil Cantrell: 48-34, 8TH SEED
This is all predicated on good luck, meaning health, which of course we usually do not get. I think without coaching and front office turmoil, it's probable the Suns win a few more games than last year.

Look for the Suns to have a much better/more consistent season this year with 1 philosophy from start to finish. Nash should return to form while Amare (playing for a contract) should step up and remind everyone why he is one of the greatest offensive players in the L.

The Shaq experiment may have been a failure, but he was still our most consistent player. By trading him off, we now have a team with no interior defense. Amar'e, Channing, Robin (when he's healthy) are at best help defenders. But you can't have your entire front line consist of help defenders.

We also have a team with no post presence. Amar'e can score, no doubt, but that's off pick and rolls, and his jumper (which to his credit, is amongst the best for big men). He has almost no back to the basket game. Without a post presence, we can't switch up our tempo's if our players aren't hitting from the outside. Even with some proven shooters (JR, Nash) and interesting shooters (Channing), we can't expect them to be on every night.

Our bench (except for Barbosa) is about the most offensive unskilled group of guys I've seen on an NBA floor (the year the Heat ran with a bunch of D-Leaguers was definitely worse). I see a lot of hustle and athletic ability in these guys, but you're not going to look for Amundson or Dragic to light it up.

The only person who likes Earl Clarks jumpshot is Earl Clark, which is bad cause he keeps taking it. Jared Dudley is great, but he won't be open for 3's if noone cares to double down on Robin, Lou or Earl. And name any one of those guys that can actually face up and beat their man to the basket? I don't know what's worse: That Barbosa will want to run isolations for himself on every play off the bench, or that it's actually the Suns best option when their starters aren't on the floor.

And we haven't even touched on the fact that Steve and Grant are in their mid 30s. This is all predicated on them staying healthy and playing 75 plus games for 35 or so minutes a game.

I actually think 41-41 given the fairly drastic changes, isn't a bad record. It's just not enough in the Western Conference.

Leave your predictions in the comments