We interrupt today's grieving over the loss to the Lakers to bring you this random thought....

How does Channing Frye compare to Utah's shooting big man Memhet Okur and what will that mean to the Suns salary situation next season.

As always, we start with the stats...

Okur is scoring about 1.5 more points per game and grabbing 1.8 more rebounds per game in about 2 more minutes per game played. Edge Okur until you notice that Frye is a more efficient shooter from range: 43.3% vs 38.1% for Okur. So far this season, Frye is taking and hitting about twice as many three's as Okur.

The one number that really stands out is free throw percentage. There's no reason for Frye to be at 64%. If he can increase that by 10 or 12 percentage points his scoring will increase by a couple of points per game. As teams focus more on closing out on him and preventing him from getting wide open looks he's going to have to put the ball on the floor more. That's going to lead to more free throw attempts which he's going to need to hit.

On the flip side, Okur is turning the ball over at much greater rate which is certainly a big reason why his efficiency rating is only +14.86 compared to +14.20 for Frye.

Defensively, they both average .7 blocks per game and Frye has the edge in steals which isn't a surprise since he is much more mobile than Memhet. Okur's size does give him an edge as post defender but Frye's ability to guard the pick and roll and provide activity makes them about a wash on that end of the floor.

Both big men play an unconventional role for their team. Centers who not only move the ball from the top of the arc but camp out and hit spot up three's. Their impact on their team's spacing is a big reason why each team is able to move the ball and get open shots.

They are typically guarded not by the other team's center but by a smaller, more mobile Power Forward. This creates a mismatch for their front court mates (Stoudemire and Boozer) who have the speed advantage over the bigger, slower Centers who are left to cover them in the paint. 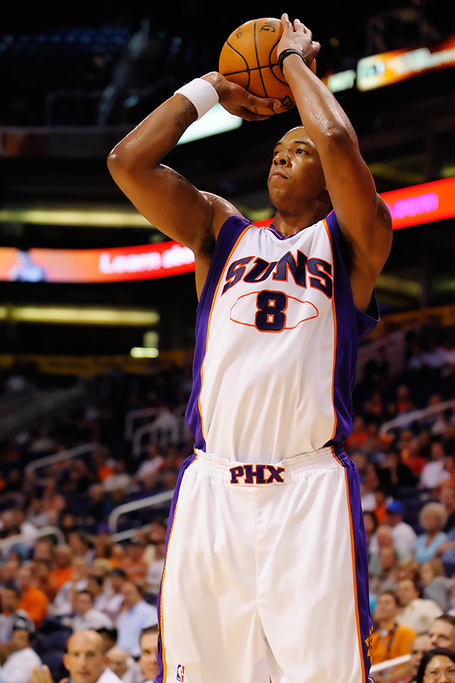 Here's where it gets really interesting. Coming from his roster purgatory in Portland, Channing accepted a $2m per year deal with a player option for next season. Okur is slated to bank about $10m per year for the next three years.

While the Suns are getting a steal this season in the production per dollar category this isn't likely to last. If Frye can continue to play at or close to this level he will almost certainly opt out of his option for next year and ask for and be worth at least the mid-level exception (about $5 or $6m).

The Suns will need to start accounting for Frye's future salary now as it considers what to do with Amare Stoudemire when the trade deadline approaches.

If Amare isn't traded and doesn't opt out (a very likely scenario) the Suns will have $61m in contracts for 10 players not including Frye. That will give them about $8m to $10m to spend on Frye and Amundson who is also a free agent this summer. This should be enough to bring back this roster without having to worry about being much over the luxury tax. Not a bad position to be in given how well the this team looks so far.