The 10-2 Phoenix Suns Are Tough

Share All sharing options for: The 10-2 Phoenix Suns Are Tough

Gone are the days when the Suns ran teams off the court with high-paced fun and gun basketball. This version of the Phoenix Suns has already proven to be more versatile, mentally tough and resilient than any of the earlier Nash-era teams.

Asked before Sunday's game against the Raptors what his favorite part of this year's team is, Suns head coach Alvin Gentry quickly mentioned the teams resiliency. His favorite win up to that point wasn't the big upset over the Celtics at the Garden. He was impressed with his team coming from behind in Philadelphia on the last night of a long road trip. It was a game the team easily could have let go but they battled back and got the win.

Five times in ten wins the Suns have been trailing going into the fourth quarter and five times now the Suns have overcome double digit deficits to get the win. Obviously the Suns don't want to have to come from behind but what it shows about this team are a few things that have been missing in Phoenix for the past 5 years.

A few years back when the Spurs were at the peak of their greatness they played inside-out defensive basketball and liked to keep the score in the 80's. But on numerous occasions they would get down to the fast-paced Suns early in the game only to adjust on the fly and out -run and out-score Phoenix beating us at our own fast paced game.

Great teams have a style of play that suits their personnel and their coach. Plan A. They also have the depth and willingness to adjust when Plan A isn't working.

This Suns team has shown that it can win when the long ball isn't falling. After averaging 47% from three to start the season the Suns are 22 for 68 (32.4%) from behind the arc over the past three games.

After getting blown out in the first poor shooting night in LA, the Suns in the past two contests were able to adjust to a more defensive approach holding Toronto and Houston to a combined 35.3 field goal percentage in the 4th quarter.

In Sunday's game it was Jared Dudley closing out the game in place of Grant Hill and Tuesday it was Jarron Collins who pitched in with 5 rebounds and 6 points in 9:25 of play in the fourth.

Maybe even most impressive is that despite the focus on rebounding and defense and without the long ball the Suns still shot 50% in the fourth periods of both games and continued their streak of breaking the 100 point mark in every game this season.

Say what you want about the Spurs and I love beating them as much as any Suns fan, but you have to respect the way they approach the game. They have proven over the the years to be extremely tough to beat in close games because they have the mental toughness that leads to late game execution. 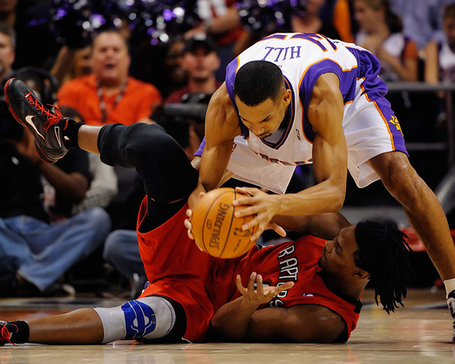 The Suns are now 3-0 in games decided by less than 4 points.

This is a team that not only believes they can win but they trust and support each other. Amare's 7.8 rebounds per game isn't all that impressive but his activity is leading to extra possessions and he and Channing Frye are boxing out so the wings can grab the loose ball.

This is a sign they are willing to do whatever it takes to win and display of maturity and grit that we've not seen before. It is almost as if the team's stars and starters are being pushed by the example set by hustling role players like Amundson and Dudley.

Doing what needs to be done. Late game execution. Hard work. Those have been hallmarks of Spurs basketball and now for the first time the Suns are singing from that song book.

People criticized Steve Kerr for wanting to turn the Suns into San Antonio-West. Maybe those fans are seeing now that while the style of play on the floor doesn't have to be the same the mentality of winning teams is important.

Whatever it is this season, the Suns are clearly on the right track. They are winning games in ways they couldn't have back in the "glory days" of the run and gun and they are winning fans over not with their high-flying scoring antics but with toughness, determination, execution and grit.

The true test will come when the team has to overcome a losing streak and suffers the inevitable injuries but for now this is a Suns team we've waited a long time to see.