Share All sharing options for: Nash and Suns Run Through Grizzlies 126 - 111

This is one of those games where box scores and statistics don't really tell the full story.

Normally, when you allow a team to shoot 48% from the field and win the rebounding battle by 20 and put up 22 second chance points you are going to lose or at least be in for a dog fight.

But normal teams don't have Steve Nash and Amare Stoudemire picking apart your defense and leading their team on a 41 to 20 run over a 12 minute stretch. With 3:31 to go in the 1st half the teams were tied at 47. By the 3:01 mark in the 3rd quarter the Suns were up 88-67. During that stretch the Suns hit 15 straight baskets, a streak that was only broken by a missed three from Jason Richardson who said this about his failure, "Hey man you gotta keep that low, you gotta keep that quiet."

Richardson was joking of course as was the entire Suns locker room after this win. Channing Frye was in fine form taking flack from some kind of comparison he made of himself to Rashard Lewis and overall the guys were a very happy bunch as they deserved to be.

Of course, the game wasn't without fault.

"The one thing we need to improve on is we are giving up too many middle drives to the middle of the floor and when we do that it obviously opens up the whole rest of the floor and they can make plays. So we have to do a better job of keeping the ball out of the middle," said Coach Gentry.

He was less concerned with the offensive rebounding differential as many of those shots came on the same possession and were multiple put backs. As Gentry has said before, teams can crash the offensive glass but the Suns will make them pay by getting easy run outs and tonight's 19 fast break points showed that.

Defensively, the Grizzlies came into this game holding teams to under 100 points over their last five game but against the Suns attack they were helpless.

Early in the game they were staying home as Nash easily got by Conley which lead to some open looks for Steve. When the Grizzlies tried to adjust and bring help on Nash he started finding his teammates and they nailed their looks which helped Captain Canada log 16 assists in 30 minutes which was 1 more than the entire Grizzlies team in a combined 240 minutes.

Nash said this about the defense he was facing, "I think they were just caught in between. They wanted to stop my penetration but they wanted to get back to Amare and I don't think they were accomplishing either so that was opening up a lot of lanes for me to find my teammates."

Coach Gentry also felt that Channing Frye's presence is making a difference. His ability to spread the floor and pull a big out of the paint is helping Nash and Amare pick apart the defense and get right down the lane for some of those classic power jams. Frye was 3 of 4 from behind the arc and finished with 14 points and 4 rebounds. He also had a couple of nice hard fouls. He's no "tough guy" but when he takes a foul his man is not getting off a shot. Love it.

Grant Hill is also benefiting as his man leaves to cover the roll Hill floats out to the open spot and gets good looks. Grant had 12 points on a perfect 6 for 6 shooting.

Of course, Amare himself playing great is key. Hill thought it was one of the better games Amare's played and Coach Gentry was very impressed with his work in isolation. I can't disagree.

Early on he was aggressive facing up on Gasol and attacking his feet. When they backed off him he was taking and hitting open jump shots. Defensively he was active and disruptive almost to the point that you can overlook his getting destroyed in the rebounding department by Zach Randolph 13 to 4.

Perhaps it is the library-like atmosphere in the US Airway Center that's leading to these slow starts from the Suns. It's nice that a lot of people are coming to the games (and spending money) but it really doesn't help if they all sit on their hands for the first half. Where's is Ced Ceballos and his idiot cheer leading when you need him? Can't they give away some T-shirts or socks or something to get the crowd going?

Both teams started shooting too cold for the 80 degree weather outside and were 6 for 17 combined about half-way through the first quarter. The Grizzlies got going first with a couple of nice looks from Zach but Frye and Richardson's three-point shooting (3-5) kept the Suns in it long enough for the rest of the offense to catch up.

The Suns tied it at 27 at the end of the quarter off a beautiful turn around fade away in the lane from Dragic after he probed baseline in a Nash-like move.

Amare had a solid start to the game attacking Gasol facing up and being active on defense against Randolph. He had 3 rebounds and 6 points in his first 12 minutes of play. He looked but energetic but also controlled. He also had only 1 foul which has been the trend this year of staying out of foul trouble.

With Nash and Amare on the bench the pace picked-up but unfortunately the Grizzlies kept scoring as well even with Gasol resting.

The Suns started pulling away at the end of the half on a series of fast break run outs. The Grizzlies are so intent on crashing the offensive glass that they are not able to get back in transition. Offensively, Nash is able to get right by Connley and their Grizzlies bigs are afraid to rotate over.

What made all of that possible was the improved effort on the glass. The Grizz out-rebounded the Suns 16 to 8 in the 1st quarter but Phoenix came back in the 2nd quarter and grabbed 12 boards to 9 for Memphis. Once again it's a team effort on the glass with 4 Suns players tied for the lead with 3 each while Memphis is relying on Gasol, Randolph and Gay to do all the work.

By about mid-way through the 3rd period the game was already in blowout mode so I stopped keeping good notes.

And how about Grant Hill...not bad for an old man 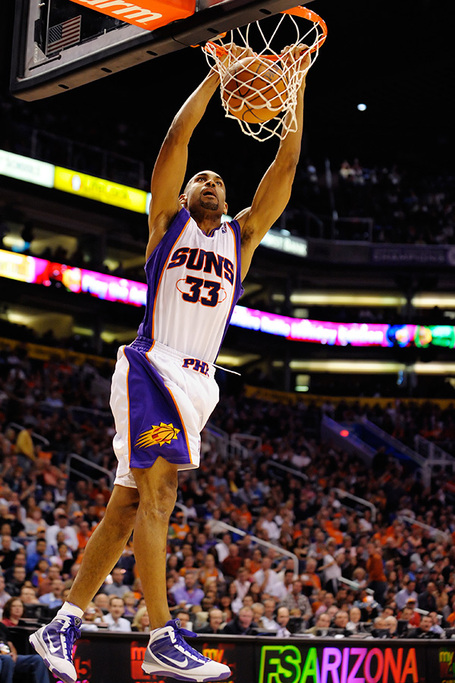 Gentry did bring back his starters at about the 8 minute mark in the 4th period after the Grizzlies cut the lead to 17. Gentry said that he wanted his starters to put the game out of reach so he could rest them instead of risking having to bring them back later in the period.

In the game Sunday against Detroit he didn't do this but the Grizzlies were playing hard and were making a push. In this case it felt like the right move to me and Nash only ended up with about 30 minutes and Hill with just 23. Amare lead the team with 36 but that's nothing for him and probably good for his overall recovery. Besides, he was playing so well why would you want to limit him?

Great win for the Suns. Very impressive way to close out the big two-game home stand before they now head out for another 4-game East Coast trip that goes through Minnesota, Toronto, New York and Cleveland on no rest. The board in the locker room had the high and low temperatures for each city and "snow" by Toronto. Gentry fully expects Shaq to play against the Suns regardless of whatever pain he's feeling

It's just another test for this team that so far has risen to almost every challenge and as a result is in sole possession of the best record in the NBA. 12-3. Not bad at all