Preview: Suns vs Magic (Forget about that Dwight Guy)

Share All sharing options for: Preview: Suns vs Magic (Forget about that Dwight Guy)

With all the focus (understandably) on that big guy in the middle with fancy muscles and jumping and what not, I want to turn our collective heads and give a cough out to the point guard match-up in tonight's game.

On one side we have the Hot Older YMCA White Guy Actress who is dominating and on the other side the young guy who's not so shabby her himself.

From NBA.com, lets check the tale of the tape... 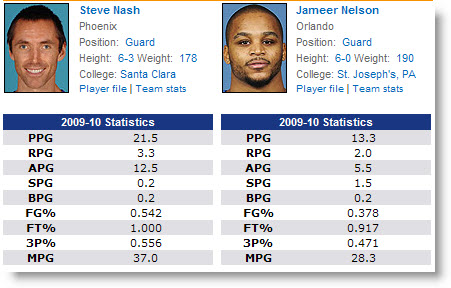 Not even close. So lets not get all bent out of shape worrying about how many Frye's Howard might eat tonight. This is a team effort and for the time being our team is being driven by the best in the league.

There, I said it.

Right now Steve Nash is the best point guard in the league.

Quick, someone stop me before I declare this Suns team the best ever and a lock for the 2009/10 NBA Championship after going 4-0....

azcentral.com - members
It seems like a tough call for the Suns to play Orlando on the second night of a back-to-back but the Magic is coming off a game Tuesday night at Detroit. The Magic lost 85-80 and Howard is going to be ornery. Howard fouled out in 17 minutes of play, reminiscent of a December 2006 against Phoenix in which he fouled out in 19 minutes against Stoudemire.

I can't help it. I've been thinking about the front line match-ups.

What are the chances that Howard leaves the paint to cover Frye?

Which means Howard will have Amare and that means putting D-Ho in about 3,000 different pick and roll situations with both Nash and Amare going straight after him. If they are calling the game tight and Howard is overly aggressive coming off the Magical loss last night in Mo-town than we've got a solid chance.

On the other end, let Frye deal with Howard in the paint and Amare can stay safe by chilling with Ryan on the wings.

Hell, I am looking forward to seeing Amundson on Howard or even Collins. But I don't need to see Amare trying to handle him 1:1 in the post.

This is a game where we need to keep Amare out of foul trouble and attacking on the offensive end.

And let's not for Mattie Barnes

What's the over / under on him making bad plays (silly turnovers or ill advised three's)?

I have to study for a test (that I take at 5pm… right when the game starts..) so I don’t time to write a good preview – so here’s a quickie -

I think the Magic will sink or swim depending on how Howard plays. If he plays out of control because he’s still upset about yesterday’s loss and officiating – then I can see him picking up more fouls tonight and self-inflicting bench time. Plus because his shoulder is sore it will be interesting to see how (if at all) that will affect his game.

Other than Dwight – the Vince Carter Grant Hill match-up will be a fun blast to the past affair that Grant Hill will come out on top of. As for everyone else on the Magic – we have the advantage.

The other Eutychus Keys

Other than that – Orlando goes deep to the bench and has a great (and huge) front line…. but with that huge front line they will more than likely have trouble coming out on Channing Frye or dealing with how well we have been spacing the floor lately. It will be a great game tonight and I’m interested to see how we play on our first back 2back!!!

see you for the second half maybe..

What really bothers me is they are letting guys hammer me at one end of the floor, yet I’m being called for everything. All of those hits take a toll on my body after a while.

As for my shoulder, it’s really sore right now and it really hurts when guys are hanging on me and pulling on my arms. The trainers have done all of the tests and they say everything is fine, but it’s still hurting me a little. They said my shoulders are plenty strong enough around the injury, but it’s like a bruise and will take some time to get fully better.