One of my favorite terms in baseball lore is the Mendoza Line. For the Suns this season we have the Taco Line.

If the Suns score 99 points you win (yes, you!) two free tacos. This applies to both home AND away games.

Ed Note: I would link to the page on Suns.com that shows this promotion along with lots of other promotions but the NBA doesn't allow that. 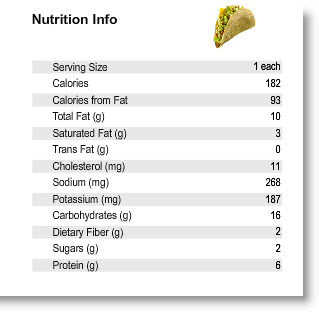 Two free 182 calorie snacks aside, the Taco Line provides a very meaningful measure for the Suns likely success. New defensive and rebounding focus is nice but this team needs to score the ball to win games and stay happy.

The C's are holding teams to a measly 81 points per game and the Suns are averaging a league 2nd best 111 ppg (link to stats page not allowed) .

I am so confident that the 99 point mark is the key in this game that I promise to both buy and eat two tacos if the Suns don't score 99 point and still manage to win the game. I am laying it all on the line here.

Keys to Crossing the Taco Line:

Seriously now, this game is going to be a tough win just like winning in Orlando was always a long-shot. That doesn't excuse a blow out and getting absolutely torched in the 3rd quarter.

Tonight the Suns are better rested after barely playing on Wednesday so I am looking for a full 110% effort and a competitive game. And if they are able to find a way to beat the Celtics vaunted defense and reach the Taco Line you never know...

Be sure to check out CelticsBlog

I think the key to this game could come down to two things. The Amare KG match-up and if our hustle players can match the know commodities that the Celtics have.

First. The matchup. KG is just one of the best PF of all time. Offense defense or otherwise. He has adapted as he has lost some athleticism and continued to remain at the top of his game. We have yet to see this with Amare. There have been flashes but how far along is overall process. Is he ready to carry this team on his back not just physically but mentally. Does he play a complete game. At this point in their prospective careers Amare should be able to get his offensive game going. Maybe not dominate butt score when needed. He has to be mentally there for rebounds and be able to completely control KG on defense. He needs to force the double team while on offense and control KG while on defense. If he can do this the rest of our game should come into place.

This leads to our other question. Does all of our potential players come out and play. Do they chechout at certain points in the game or do they stay focused. Does Frye get frustrated when his shot doesn’t fall or does he just find a way to contribute no matter what. Does Dragic continue to build his confidence. Can Collins fill the role is wide butt is capable of doing. Can Clark also find ways to contribute and start putting together a complete game.

I know we are missing Barbs, but if the other pieces come together and we get production from Grant and JRich. this should be an interesting game.

This game is more mental than any other game we have played so far or will play. The Celtics are perhaps the most fundamentally sound team in the league. If we can stay engaged we have the potential to beat this team even on their home court. On that there are too many questions to post a guess o the score. It should be good.