Share All sharing options for: Preview: Suns vs Magic

Bad news: The Magic lost last night in Utah and SVG is gonna be pissed about 9 turnovers in the 2nd half leading to 15 points for the Jazz.. He's probably also somewhat perturbed by his $118m forward refusing to re-enter the game. Really, Shard?

Good news: The Suns have had two days to both rest physically and more importantly recover their mental focus and plan for this game

Bad news: Leandro Barbosa is still out will be for a few more weeks which leaves the Suns bench without much punch. I would like to see Dragic step up in this game against Anthony Johnson who I believe is 67 years old (he's actually 4 years younger than me which makes me on the wrong side of the Larry King line)

Good news: I am going to stop this 6th grade trick of trying to write this way

Bad news: You just never know when I might get lazy and pull this out again

But what the Magic do they do very well and that's play inside out and shoot the three (1st in 3PA). And they rebound (2nd in DReb) and after a slow start to the season they are once again defending well (9th in DEff). All stats provided by my new favorite stats site - Hoops Stats.com.

The most impressive thing about the Magic this year has been their ability to play through injuries including the loss of their all-star point guard Jameer Nelson since the 16th of November. They are 9 and 2 without him including wins over Boston and Atlanta and overall they are 17 and 5 on the season.

Of course, they are 23rd in the league in Strength of Schedule with their opponents averaging only .485 versus the Suns who at 13th have faced a teams with a combined .504 winning percentage. But hey, you can only play who's in front of you on a given night. No excuses, right?

The Magic offense looks a lot like the early 2000's Lakers with the big guy in the middle, a dynamic shooting guard, and lots of shooters that spread the floor. Except Howard isn't as good as Shaq was then and Carter is no Kobe. The difference is the Magic are a better outside shooting team by about five extra points from behind the arc and no offense to Mike Penberthy but Orlando's bench is much much deeper.

The Magic want to get the ball into Howard and work off of him when teams double. Coach Gentry said the other day that the Suns are going to try and avoid doubling Dwight which pretty much means that Channing Frye is going to be road kill in the paint. That might not be the worse thing in the world though.

Like teams are doing to the Suns when they "make Nash a scorer", you can live with one guy getting a lot of touches and points if you keep the other guys from getting hot. Especially early in the game. Later if you have to you can bring help on Howard when he puts the ball on the floor and if the games close you can always put him on the line (64%).

The Jazz last night went the other way and were effective in bringing help and rotating back out. That worked too but I like my plan better than Jerry Sloan's because clearly between him and I you know who's got the better basketball mind.

I am looking forward to seeing PsychLo (my new nickname for Robin) get some minutes on Dwight. Channing is shooting 35% from three lately and if he starts the game cold I would not be surprised to see PsychLo come in about half way through the first quarter. His defense has looked pretty good since his return. The problem is getting him in the right spots offensively so he's not disrupting the flow. Hopefully, a few days of practice have helped.

Notice how I didn't once mention Robin's Door?

Offensively, the Suns need to push the ball and not let Dwight get set up in the lane. In the half court pull him out on pick and rolls and dare him to switch on to Nash. If they do switch then Steve's got to attack Howard off the bounce and try and get him into foul trouble.

Ball movement and movement off the ball. That's what we are looking for.

Mostly though, the Suns just need to be sharp, decisive and confident. The Jazz dropped 120 on them last night including a 68 point second half. They did that by being more active and aggressive, moving the ball and attacking early.

Late start tonight and National TV so no excuses for the game thread to be quiet. Bring it, Suns fans!

ESPN's RV Experience will be at the game tonight by the way... 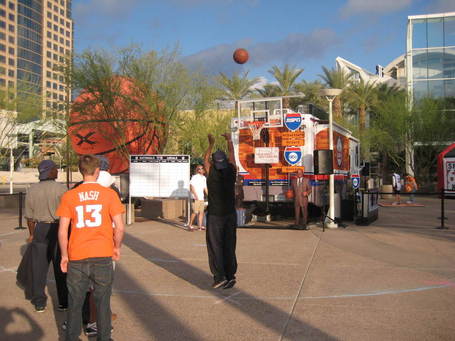