Phoenix Suns Remain Undefeated at Home with Win over Spurs

Share All sharing options for: Phoenix Suns Remain Undefeated at Home with Win over Spurs

How about that home cooking!

That Suns are now 9-0 on the season and have won their last 18(!) home games going back to March 12, 2009. That's pretty impressive right there and you can't exactly call wins over the Spurs and Magic cupcake walks. Or brownie strolls. Or pie wanderings. Or whatever. They were good wins and Coach Gentry said as much, "That was a good win."

Amare had another thought on the matter, "Definitely a big win for us." And Dragic added, "It's great."

So, I think we can call that a consensus. Good win. Big win. Great.

Sure, the Suns turned a 20 point lead into a 5 point lead during an 8 minute stretch of the third quarter but hey, that's going to happen. Right, Steve?

"You know, I think this is the type of team we are. We're going to go on big runs and we're going to let teams back in the game sometimes with the way we play but I think that's how we win games. The alternative is going to be a 35 or 40 win team. If we play this way we have to live with the ebb and flow and we got a chance to win 50," explained the Suns leader, two-time MVP and 25 point, 13 assist magician.

Coach Gentry agreed, "I didn't think it was going to be a 25-point win against those guys, that just doesn't happen."

HEY! LOOK OVER THERE!! DID YOU SEE THAT AWESOME AMARE DUNK AND THAT GREAT NASH PASS!!!!

Amare was incredible tonight. Early in the game his jump shot was straight money giving him 18 first half points on 8/11 shooting. He wasn't getting to the line obviously - since he was taking wide open jump shots - but he made his presence felt in the paint with 8 early boards.

Stat Sun Tzu Gorilla Gamer MAX CONTRACT finished with a monster night matching Duncan with 14 total rebounds and tearing down the rim with a couple of massive jams with take-off points somewhere near Gilbert.

"You guys probably got a better view than I did. I was focused on the rim. I was just trying to make it," said Max about one of his more impressive retro-jams.

The star of this game - Not named Nash or Max - was Slovenian Frosty Dragic who was pretty pleased with all the media attention he received in the locker room. Actually, that's not fair. He was pleased with career high 18 points and his great defense. Nope. That's not fair either. He's just pretty much always pleased. He's kind of Barbosa-like that way. Just a happy guy who struggles to grow much in the way of facial hair but is maturing as a basketball player before our eyes.

Needless to say, Goran gave credit where credit is due, "For a few games I've played with Steve Nash, so it's a little bit different for me, but Steve is a great player. He finds all the players all the time. It's much easier for me when I just catch the ball and shoot it."

Before you get all - Dragic is a Shooting Guard - let's not forget that he's a very good passer and has solid point guard potential. Of course, it is easier for him to play off the ball with Nash but that doesn't mean he can't play on the ball behind Nash.

Whatever ball he's playing on he took a big step forward tonight in the eyes of the league and national observers who were quick to write him off last season. And he knows it too, "Definitely, I think so."

Other Game Notes Taken During the Game: 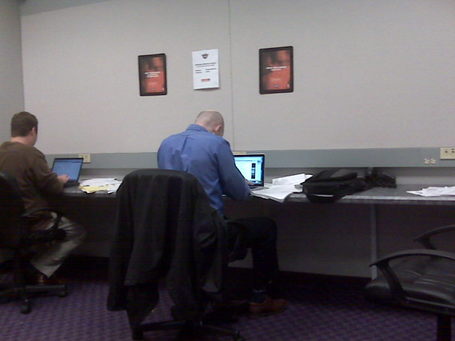