Hopefully the Suns can make like Alando Tucker and wash the icky residue of last night's loss to the Knicks off their hands before mixing it up with the Cavaliers in Cleveland tonight.

The Suns head into Cleveland 2-1 with a chance at salvaging a winning record on this eastern road swing before coming home to face the Kings on Saturday.  Last night the Suns came out flat on both ends of the court and despite rallying to get within 6, never recovered offensively or defensively.

So, which Suns team will show up tonight? The 14-3 power rankings darlings or that group of zombies that took the court in New York last night.

The Cavaliers come into tonight's game riding a 4 game winning streak, including a 16-point thumping of the Mavericks on Saturday.  That's right: Saturday.  In addition to being at home, Lebron and company have 3 days of rest.  For their part, after taking most of yesterday's game off, the Suns should be plenty rested as well *rimshot*.

At the point, we have Steve Nash going up against Mo Williams.  On paper, this would seem to be a clear advantage for the Suns, but last season Mo torched the Suns for 30 points in their meeting in Phoenix and 44 in Cleveland (Nash missed this game with an injury).  Off the bench, it's Daniel Gibson vs. Goran Dragic.  While Boobie is capable of getting hot, in 8 games this year, he's only averaging 6.8 point per game.  If Dragic can bounce back from a terrible performance in New York, they should basically cancel each other out. 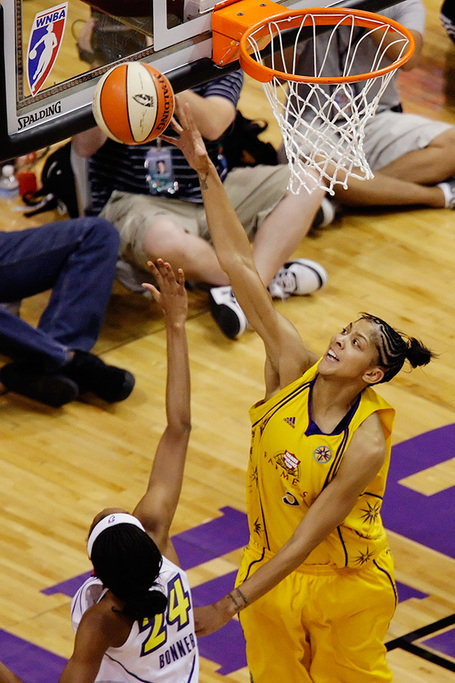 I thought it was the 30-somethings that were supposed to struggle with back-to-backs? Jason Richardson has been a key ingredient to the Suns potent offense this year, averaging 17.4 points per game, good for 2nd on the team behind Amare Stoudemire.  However on the 2nd night of back-to-backs, all of J-Rich's offensive numbers have taken a hit: -7.7% on FG%, -4.9% on 3PT%, -32.1% on FT% (yipes!), and -6.1 PPG.   There's no reason he shouldn't reverse that trend against Anthony Parker (and you thought the Suns had cornered the market on lesser siblings!  He has to play in the shadow of his sister Candace.) and he'll have to if the Suns want to win this one.

Off the bench at the 2, it will be interesting to see who the Suns go with in Barbosa's absence.  After pouring it in (14 points on 4-7 shooting), Alando Tucker may have earned some increased minutes.  Equally mysterious is who the Cavs will bring off their bench behind Parker.  After seeing limited use thus far this season due to personal and health reasons, Delonte West played a season-high 29 minutes against the Mavs, scoring 10 points and grabbing 10 boards.

Grant Hill will have his hands full with LeBron James.  If he and Jared Dudley can combine to keep LBJ around his averages, the Suns will probably consider that a success.  I don't think anyone has any illusions of stopping him.

Off the bench, Jamario Moon is something of a Matrix-Lite, so he and Jared Dudley will engage in some kind of sideshow hustle competition.

At power forward, the Suns have what should be their clearest advantage, offensively at least.  Amare Stoudemire needs to bring his vaunted Gorilla Game to exploit Cleveland's tandem of Anderson Varejao and J.J. Hickson.  If he can stay out of foul trouble, look for Amare to log heavy minutes and heap piles of offensive abuse on the Cavs while not having to worry too much about being challenged on the other end. Except for rebounds.

Here's where line-up and strategy will come into some serious play.  It's entirely possible the Cavs elect to send Varejao and Hickson out on Frye at the perimeter, keeping Shaquille O'Neal and Zydrunas Ilgauskas in the lane to defend Amare on the pick and roll.  If that's the case, look for Amare to log heavy minutes and heap piles of offensive abuse on the Cavs.  (See what I did there?)

Defensively, Channing Frye doesn't have the bulk to keep up with Shaq in the post and the Cavs will probably go to this mis-match early and often, much like the Lakers did with Andrew Bynum earlier in the season against the Suns.

Robin Lopez will probably get some early minutes on the defensive end to see if he can help stop the bleeding in the paint against the much larger Shaq. Robin vs. Shaq has the potential to be explosive as Robin looks to heap some punishment on the The Big Mentor who rode his Fuzzy-head pretty hard last season.

Of course, that's just wishful thinking. Shaq will destroy Robin given the chance.

Offensively, the Suns will look to spread the floor against the Cavs using their dead-eye shooting (which hopefully they bring with them tonight) to exploit the lack of speed of the Cavs big men.  If his shot his falling, Channing Frye could have a career night.  Similarly, if the Cavaliers lumbering bigs stay at home on Stoudemire, he and Nash should have a field day running the pick and roll till the cows come home.

Defensively, the Suns will have to find a way to limit Cleveland's opportunities in the paint AND contain the speedy Williams AND contain LeBron James.  If the Lopez and Frye struggle with Shaq, look for Jarron Collins to come in and provide 6 additional fouls against O'Neal.  I'm pretty sure Robin will use his up fairly quickly.

In a perfect world, the Suns draw the Cavaliers into an up-tempo shoot-out, regain their accuracy and out-run the Cavs.  For their part, Cleveland and their 8th ranked defense (100.6 points per 100 possessions) will look to keep things slow as molasses (7th slowest pace in the NBA), bogging the Suns down in a half-court game.  Look for them to pound it inside and run plenty of isolations for LeBron James.  Like, 70 of them.

While I think the Suns will come out more focused than they did last night in New York, I don't see them winning this game.  They'll keep it close in the first half, but their porous defense will be their undoing as the game wears on.