3 Minutes 57 Seconds that Lost the Game for the Suns

Share All sharing options for: 3 Minutes 57 Seconds that Lost the Game for the Suns

Sports are a funny thing. Sometime it comes down to one play. A game of inches. A buzzer beater. And sometimes you get run out of the gym from the opening tip which is what happened to the Suns Tuesday in New York.

This game had a strange flow to the opening quarter which on the surface looked like it was completely dominated by the Cavaliers. They out-scored the Suns 33 to14. Shot 52% to the Suns 30%. Out-rebounded Phoenix 19 to 7 and scored 18 of their 33 points in the paint.

Watching (and re-watching) the 1st quarter though you get a slightly different sense of how things went down that boils down to these factors:

Here's the blow by blow for the crucial 3 minutes 57 seconds which started with the Cavs "only" up 18-12 and the ball in the Suns hands.

Despite missing some open looks and blowing some defensive assignments the game at this point was far from being lost. By the time this stretch had ended it was curtains.

This possession really was telling. The Suns found Grant Hill in the corner with a mismatch against JJ Hickson. Hill drives and draws a crowd and skips the ball to the far corner where it rotates another time to a wide open Steve Nash at the top of the arc.

This was beautiful Suns basketball. Classic drive and kick. Unselfish passing that resulted in your best shooter having the ball with a wide open look. Except he passes it up and tries to pump fake and drive and in the process travels and turns the ball over. Perhaps because Nash had missed a few shots or perhaps he just didn't feel that shot at that moment but you do not expect Nash to pass up an open look like this. 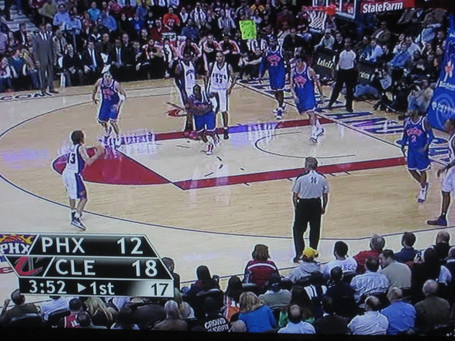 Nash said after the game, "Confidence is low right now, and that's why we missed shots." In this case the confidence was so low he didn't even take the shot.

If he takes and makes this look the Suns are only down 3 and you have to think the momentum might have shifted. Maybe not. Maybe he'd have missed it. But I guarantee he will kick himself for passing up this open look.

The Suns D here gets a bit confused with the Cavs working a side screen. JRich and Frye both end up on a Cavs guard leaving Varejao to float to the lane. Amare has to help and commits the foul. Here it seemed to be a break down in communication as well as some confusion on the rotations. I wonder how much the Suns adjusted their defensive schemes for this game to account for LeBron. The rotations did not seem sharp at all. Maybe that's mental fatigue from the night before. Maybe that's trying too hard. I don't know.

At this point Gentry brings in Lopez for Amare. Big Z and Varejao are in for the Cavs. Perhaps Gentry was trying to shore up the interior D and do a better job on the glass. Amare certainly wasn't do either and at that point was ice cold with his outside shot (1 - 4 shooting). It is an open question why Amundson didn't play in this game. As of right now, I haven't heard anything about an injury or an explanation of his DNP-CD.

While Robin was in the game the Cavs had two offensive rebounds resulting in 2 of their 14 points.His defense was OK. He did his job on that end taking up space and being active.

His first possession of the game the Suns run a high pick and roll with Nash and Lopez. Nash hits Robin with a bounce pass rolling down the middle of the lane. Perhaps due to his lack of playing time. Perhaps due to lack of confidence. Or perhaps because he just doesn't have the physical ability right now, Robin doesn't launch to the rim from the top of the restricted area for a high overhand dunk attempt. Instead he takes on more big step allowing Varejao to come over and block his shot.

The Suns play solid D denying anything in the paint and Parker misses a 3. The ball comes out to Z but Lopez is able to block his put-back attempt and knock the ball off Z giving the Suns possession. If Lopez isn't in the game that's two points for Z as he's able to shoot over any other Suns defender.

The Suns often run this curl play for Richardson they call a loop. He simply comes from the baseline and the Suns big sets a screen on his man. JRich catches the ball curling (looping) around the screen and often gets an easy look at the rim. This is normally a very effective play for the Suns.

With Lopez in the game setting that screen however the timing is way off between them and Anthony Parker is easily able to fight under the screen and stay in front of Richardson causing a very difficult shot that almost goes in. JRich and Lopez both battle hard for the rebound but Big Z gets it. That guy seems to ALWAYS be in the right place doing the right thing.

As you will notice a full minute has gone by and the Cavs still only lead by 7. From this point in they will score every time down the floor going on a 14-2 run to break the game open.

The Cavs run a high pick and roll with LeBron and Verajao. Robin shows and recovers well but as the Suns focus on LeBron and preventing him from driving down the lane they leave Parker open who drains a 3 from the side.

The Suns now run a little two-man game with Hill and Lopez. I am not sure I understand the thinking behind involving Robin in his first three offensive possessions but there you have it.

Hill draws Big Z away from Robin and dishes to the open Lopez who can't handle the pass. Turnover.

LeBron and Varejao again run a high pick and roll and again the Suns suck in. This time Big Z floats out and hits an open 17 foot jump shot. Frye tried to recover but couldn't get there in time.

The Suns again run a high pick and roll with Nash and Lopez. This time Lopez and Nash are able to draw Varejao in leaving Frye wide open behind the arc. He misses the shot. 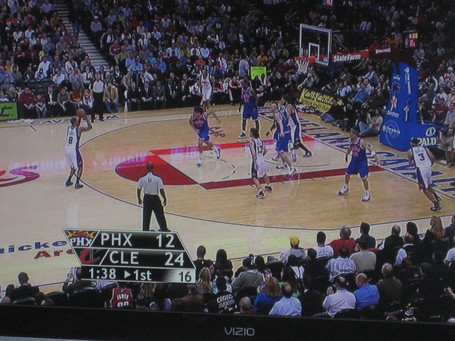 The Cavs swing the ball around and Varejao sets a back pick on Nash freeing Gibson to get an open look behind the arc. 3 points.

Nash and Frye set up the high pick and roll this time. Nash drives down the lane drawing Z to him. Z manages to deflect Nash's pass attempt across the lane. Turnover.

The Cavs run a beautiful set play with LeBron driving a bit and finding West cutting baseline who draws the attention of the Suns bigs and hits Varejao curling into the lane. The Suns react well and prevent an easy dunk forcing Andy to hit a tough floater from about 8 ft.

The ball movement from the Cavs and execution on this and the last play were very good.

Nash and Amare (in for Frye) run the high pick and roll. Varejao switches on to Nash who hits a hit arcing shot over him.

The Cavs feed Varejao the ball in the mid-post against Amare. Amare forces him baseline and doesn't bite on a pump fake. Verajao hits a tough hook shot over Amare.

Robin in-bounds to Nash while his head is turned. The ball bounces off Nash and out of bounds. Turnover

LeBron goes into iso mode holding the ball waiting for clock to wind down. He drives right past Earl Clark and into the lane. Amare comes to help and alters the shot which misses. Big Z tips the ball in over Robin who was caught flat footed on the miss.

The Suns inbound to Amare who just thinks he will let the clock run out. LeBron rips the ball from him and launches from 30 feet and drains it. The Cavs bench goes nuts. The points were waived off as he clearly didn't get the shot up but that didn't matter. The confidence carried over and the Suns were never able to recover. 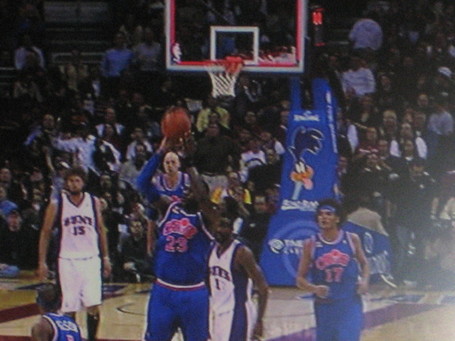 During this key stretch the Cavs (Parker and Gibson) hit open three's and Z hit an open 17ft jump shot. All three shots were open due to the Suns paying so much attention to LeBron and trying to deny the middle penetration. Varejao also hit two tough shots from within 10 feet. Both were well contested and Big Z had a tip in behind a LeBron drive that drew everyone's focus.

One theme we are going to hear a lot about in the days to come is how teams are now switching bigs onto Nash.

Toronto was the first team to do this when they played in Phoenix on the 15th over November. It was effective in that game and I remember asking Coach Gentry about it after the game. He said he wasn't concerned and that if teams did that Nash would pick them apart even though it was a bit disruptive in that game.

When the Suns played Toronto again last Sunday they continued the tactic. According to Raptors Coach Triano it was effective and the Suns only scored 13 of 31 times it was used. The Knicks followed suit as did the Cavs and both teams were able to cause the Suns some problems.

Amare said after the Cavs game,

"Both teams [Knicks and Cavs] did a lot of switching. They switched out on Steve (Nash) , put a big guy on Steve and made him dribble and put the ball on the floor. That seems to be what teams are doing now, switch and try to take me out of the game. That’s what I have noticed so far."

And Nash had this to say,

""The switching hasn't limited me, but it's limited our flow," said Nash, who had four turnovers in the first quarter of each loss. "We have not found a place where we can attack with other players. We didn't want it to turn into a one-on-one game for me, because it turns into a lack of chances for teammates."

Obviously, this is something that the Suns will need to work on and game plan for as other teams are going to try this tactic until Nash makes them pay.

Towards the end of the Raptors game they were effective breaking it by using Hill as a second ball handler.

Once Nash would get the big switched on him Amare would bring his "small" to the low post which would draw help to prevent an easy mis-match. Hill was able to float out and get wide open looks.

I expect to see the Suns do more things like this to move the ball and take advantage of the mis-matches without having to rely solely on Nash going iso on the big.

Stay tuned as that story develops.

My buddy Brett Pollakoff from AOL Fanhouse (and a total Lakers homer) pointed out that to me via email that it was actually the his Lakers that first employed this switching defense on Nash. So by my count that makes five games in which is was used - Lakers, Toronto, Toronto, Knicks, and Cavs - and the Suns lost three of them and struggled offensively in the first Toronto game.

Also for those interested here's the update on why no Lou

Notes: Shaq solid in 1st game vs. Suns- AZ Central.com
Suns coach Alvin Gentry did not play forward Louis Amundson for the first time this season. Gentry said Amundson's play did not prompt the change. It was a need to get Robin Lopez more minutes in his return from a foot fracture.