Exclusive Game Photos and Quotes: Christmas Destruction of the Clips

Share All sharing options for: Exclusive Game Photos and Quotes: Christmas Destruction of the Clips

Amare Stoudemire: "We dug deep. We knew we had to get this win and we just dug deep. We found that rhythm and found that momentum and confidence that we normally have and it showed up on the court." 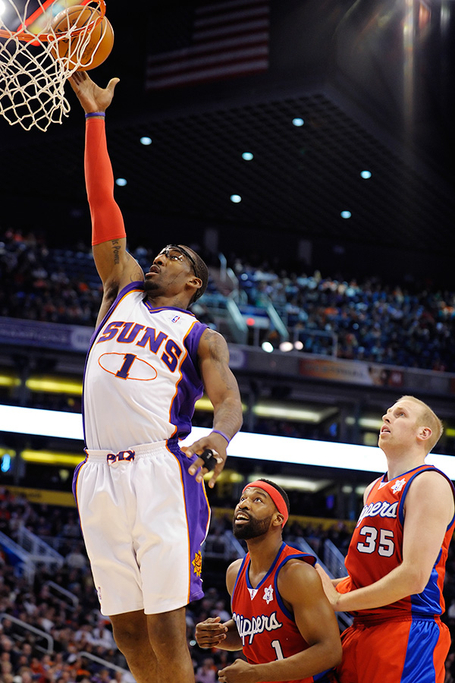 Jared Dudley:  "After I made the first few I (gained some) confidence, I took well in transition and after that my confidence was going up , I had a smaller guy posted up and they didn't double so I had time to get my feet and get a good layup off the fast break.  Usually when you have something going, your teammates find you, so that's all it was." 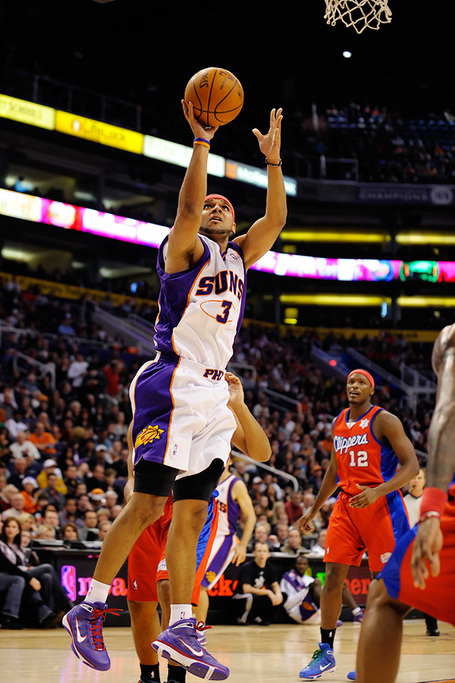 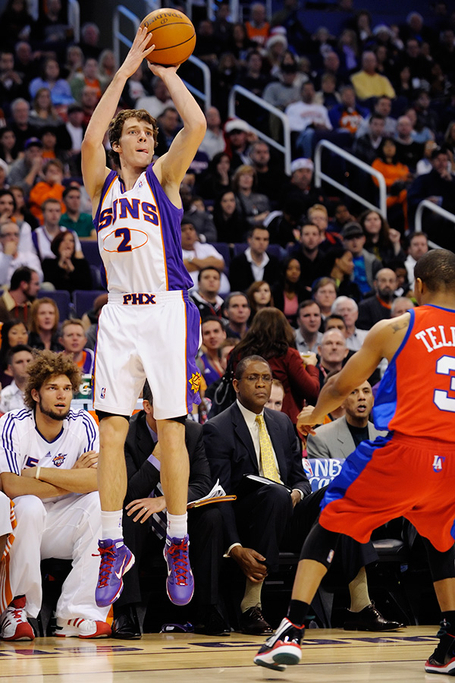 Leandro Barbosa returned and showed us what we have been missing these past few weeks: energy, passion, and offense. 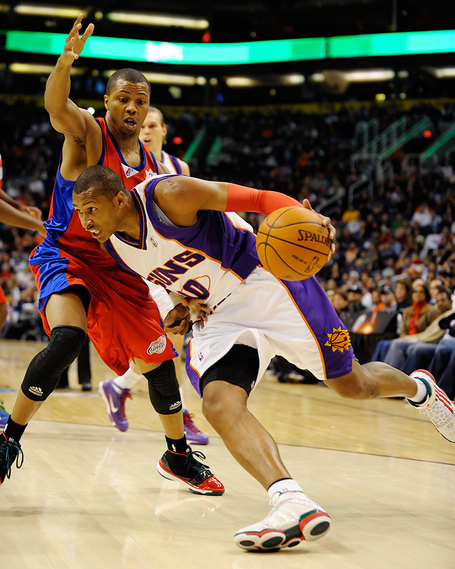 This, IMO was the play of the night. With the game virtually over, both Barbosa and Dragic skied to block his shot which led to the photo below: 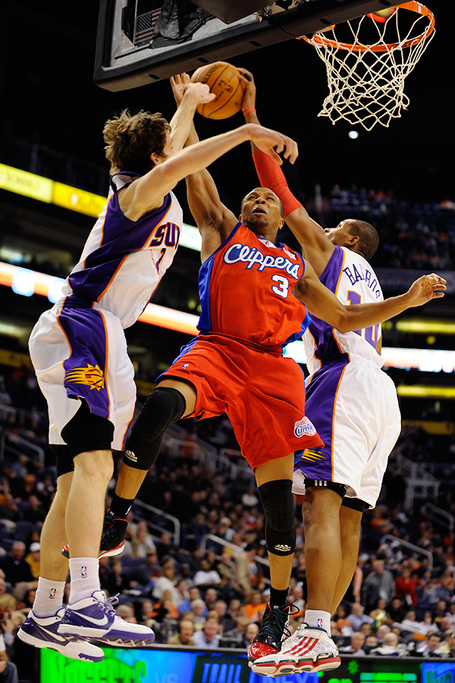 Not only did the crowd go nuts, but the Barbosa block brought the Suns bench to their feet. 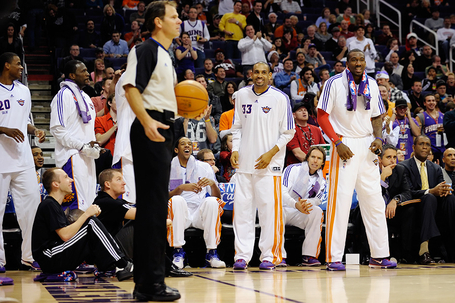 Alvin Gentry: "We just had a bunch of guys play well. Steve played well and Amare played real well and I though Jared off the bench gave us a life and I also thought Lou also gave us a big lift off the bench. So for us, it was a much needed win..."

Alvin Gentry: (On Leandro Barbosa's return):  "We need to reestablish our bench and the rotation we had. We were playing great when we had him...Everybody had a pretty defined role. When he got hurt those roles changed a bit. We started asking guys to do more than they should have. To be able to have him in the rotation will really help."

"He's always been an integral part of what we've done here. He's a guy that can change games and obviously he gives you a boost of the bench, his speed and what he does. There are very few guys that can come off the bench and do what he does. What we're all about, he's a big part of it. He can sustain the up-tempo style that we're accustomed to playing."

This was kind of funny. During the pre-game interview, Alvin was handed the starting lineup list for both teams. Mike Dunleavy, Sr. reported a starting lineup, but placed an asterisk at the bottom of the sheet stating: "Starting lineup subject to change." Gentry stopped the pre-game, visibly annoyed and spouted: "Tell Mike...I'd like to send him a note back saying you know what Mike, you know what you gotta start one of your 12 guys, what is he gonna trick us and bring in...Jesus...Tell him that's not our confirmed lineup either."

When asked whether he was surprised at Steve Nash's performance this year:

"He's such the engine that drives this thing. He opens the floor for everyone. He's such an unselfish guy in what he does."

I asked if during the Suns December struggles whether there had been any new locker room voices attempting to motivate the team:

"We're kind of an even keeled team, even when we were 14-3 or whatever it was, we never got too high because we know there's peaks and valleys in every season and every time goes through it. Boston lost a couple of games and everyone was ready to ask 'what in the world is wrong with this team...'  Especially when you have a small margin of error. We don't have a large margin of error. There's gonna be games that slip away or we don't play well the entire game. But we have good character in our locker room, we stay at an even keel and we'll keep plugging away."

"The schedule we've had, no one has had, and in the last two weeks, we played every great team from the East, we play Boston, Cleveland, we played Orlando, we played San Antonio, we get to play the Lakers in the next week and half. We feel like if we can survive this then we can compete with most of the other teams in the league."

On Steve Nash's comments following the loss at Oklahoma whereby he suggested he couldn't tell if there were 3 or 20,000 people in the building:

"I don't know if I pay any attention. I think you play and whatever, I never give it a thought, so I don't know how to answer that one."  Whoops.

From Tom Leander, asking about rebounding "discrepancies" and whether he considered getting Jarron Collins and Robin Lopez more playing time. The answer was mostly inaudible because Leander talked over Gentry during the whole response:

"We are who we are. If we could have a line change we would love to...we've taken care of it for the most part, but we've had some slippage in the past two weeks. We gotta rebound by committee, that's what we were doing early on and what we have to continue to do...we'd like to get Robin in their more and get him more time, but we're a screen and roll team and we need to space the floor, so it's tough to have Lou and Robin out there at the same time, we need to have someone out there space the floor. Over the course of 60 more games, there's gonna be a time when he's going to have to play and there'll be an opportunity for him to play."

On whether an "angry" team rebounds better coming off of losses:

(Long Pause) "I think you're either a good team or a bad team. My team in college was pissed off and we were 3-23, so I think you are who you are. We're coming off of a loss, we'll be locked in and ready to play tonight."

"I don't think it's a regression, it's just a hard situation. he plays a position where guys are really solid defensively (Dudley and Hill). He's a rookie coming to a team that is a pretty good team, so he doesn't have the luxury of being out there 25-30 minutes a game when you get drafted by a bad team and their playing you. In his case, he's fine, he's gonna keep working at it, we didn't think he was going to play a lot of minutes for us, so he'll be OK, he'll be fine."