Share All sharing options for: So Long Alando Tucker. Best of Luck!

When Alando Tucker was told in late October that the Suns wouldn't be picking up his team option for next season he talked like a guy who's days in Phoenix were numbered.

When I interviewed him about it a few days later he said this, "I love all my teammates so it will be tough in that aspect but at the same time I just have to keep getting myself better."

Over the weeks since, Tucker often stayed late on the practice court and was nothing but a true professional. He believes he is an NBA caliber player who has only been lacking in opportunity.

Now he's headed to Minnesota where he'll hopefully get a chance to play and I have to think that he's happy about that.

The Timberwolves do not have a lot of back court depth so he'll have the opportunity to take minutes from Damien Wilkins, Wayne Ellington and Sasha Pavlovic.

For the Suns this deal is about saving money. Wyn from Canis Hoopus has this break down:

For the Suns, it's purely a financial move. They'll likely waive Hart, given that his contract isn't guaranteed until next month. If they did so today, they'd still owe him about $306k. That's $766k less than Tucker's contract and since the Suns are in luxury tax territory, that difference is worth double to them. They did give the Wolves cash to cover the remainder of Tucker's contract (about $675k), but it still means the Suns can save up to $857k on the deal. That, apparently, is worth losing a 2010 2nd round pick. No word yet on which pick the Suns gave up (they've got picks from Charlotte and Cleveland in addition to their own).

Also consider that with 14 players under contract the Suns had a decision to make regarding Jarron Collins. His contract becomes guaranteed on January 10th, the day that all non-guaranteed contracts turn into pumpkins and become guaranteed for the remainder of the season. Only contracts held by the team at the end of season count towards the luxury tax.

If Wyn is right and the Suns are saving $857k on this deal, that's money that will used to keep Jarron in town.

With the progress that Goran Dragic has made this season and his ability to play both guard positions there was little question that Tucker wasn't going to play any role on this team. That was abundantly clear when he wasn't called on to fill in at all during Leandro Barbosa's four week injury absence.

Jarron isn't playing much either but at least provides veteran front court depth and can continue to serve as a calming influence on Robin Lopez.

While some fans won't be thrilled with the idea of moving Tucker for purely money-saving reasons, I don't have a problem with it. They essentially traded Tucker for Collins for the rest of the season and in the process will give a great guy a chance to earn some minutes which could be critical for his career.

The Timberwolves play in Phoenix on March 16th so we will be sure to check in with Tucker. Until then, best of luck to Alando.

More details on the trade from Paul Coro

Minnesota gets the Suns' second-round pick in the June draft unless it falls in the top 40. In that case, Minnesota would receive the Cleveland second-round pick that is owed to the Suns. The Suns will pay the remainder of Tucker's $1.07 million salary and give the Timberwolves an additional $100,000. The Suns' savings come from how much less they will be taxed for being over the luxury tax threshold. 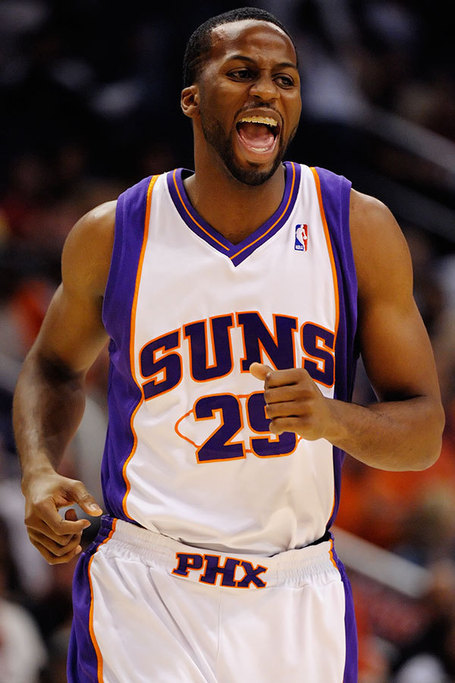