A life lesson for Suns fans

Share All sharing options for: A life lesson for Suns fans 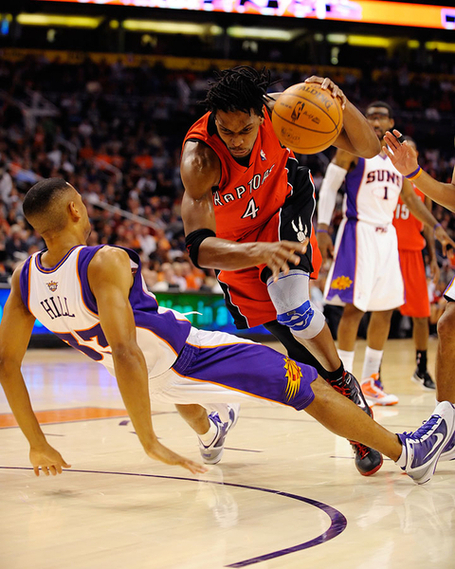 "The sky is falling!" These four words are universally recognized by anyone who had a childhood. They come from a famous tale about a small chicken who believes his world is coming to an end when an acorn falls on his head. With this simple phrase Chicken Little is able to rally a team of animals on his quest to save their dying world. Now, there are many different versions told about what actually happens to the barnyard gang but in my personal favorite version (read into this what you will), the animals are duped into trusting a fox and ultimately become dinner. The moral of the story is simple, don't panic or you'll get eaten by a fox.

The Suns have now lost two straight games (on back-to-back nights) by a combined total of 44 points to drop their record to 14-5 which puts them second in the division (behind those stupid Lakers) and tied for second in the West with the Mavericks. They have fallen from #1 in Hollinger's power rankings (an automated statistical system) to #12 in four days. The sky (or at least it's Suns) is quite literally falling!

Now, before anyone runs off to warn of the impending apocalypse, let's take a moment to reflect on what has happened with our beloved Suns so far this season.

Before the season started very few people believed that this Suns team would amount to anything. Let's take a look at the predictions given right here in our own backyard:

Up to this point I think it's fairly safe to say that the Suns have exceeded expectations as they are on pace for about 60 wins. Granted we've only played the Lakers once, the C's once, the Magic once and the Cavs once and of those four games we only won one. But it's not like our schedule has been cake as we've been on the road for the majority of these first 19 games. So why, given the expectations at the beginning of the season, should we jump a perfectly functioning ship like it's the titanic?

In sports we always hear the old cliché 'one game at a time' meaning that win or lose the athletes need to put the game behind them and focus on the next task. We expect our favorite athletes to be able to put past mistakes aside and rise up for the next challenge that comes and ridicule those that are unable to do so...yeah I'm looking at you Jake Delhomme, sorry the Cardinals had to kill you and ruin your confidence in last year's playoffs! (See what I mean?)

If we are going to hold athletes to this standard, shouldn't we, as fans, be able to do so ourselves? Yet, instead of concentrating on the fact that the Suns are 14-5 and second in the Western conference many can't get past the fact that they have allowed Mike D'Antoni and Shaquille O'Neal get their respective revenge on back-to-back nights.

Now, don't get it twisted, I'm not saying that there is no cause for concern. The Suns effort has been just awful the last two games and they have looked nothing like the team that we have all enjoyed watching so far this season. Clearly there are things that need to be worked out with this team and something needs to happen to bring back the 'nobody believes in us so we gotta go out and kill whoever we're playing' mentality/effort. However, it is not time to panic. The Suns still have one of the top PGs in the game running the show, they still have one of the best scorers, they still have a newly revived JRich, they still have the junkyard dog Dudley, they still have LB (you know...once he gets back), they still have Gentry and his system and they're still the second best team in the West with a chance to take back the top spot when they face the Lakers on Sunday.

It's a long season and EVERY team goes through ups and downs. Remember the awful start the Cavs had? During that stretch many Cavs fans worried that the Cavs had fallen from grace...seems pretty silly now, right? The Suns will rebound and will get back to playing Suns basketball. For now, let's collectively focus on the good and understand that this team is not perfect. There are many flaws that on some nights will be exposed especially as Gentry tries to figure out what to do with his rotations. Bumps are to be expected and acorns will occasionally fall from the sky. I urge all of you Suns fans not to get carried away in panic because, as Chicken Little teaches us, there are plenty of hungry foxes out there.