Just moments after "cutting the ribbon" on the All-Star festivities, Suns owner Robert Sarver headed over to the Sports 620 KTAR mobile sound studio for a sit-down interview with afternoon radio personalities Gambo and Ash.

After joking with the guys about not getting boo'd while standing next to Phoenix arch villian David Stern, Sarver launched into the topics of the day ... (by the way, there were only about 5 people by my count that weren't media or staff at that event and I think they were watching the TV cameras closer than the ceremony) 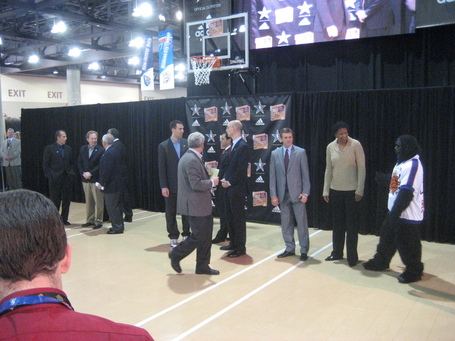 Sarver talked about his mistakes, specifically not extending Joe Johnson to a $50 million deal during the season. Sarver instead decided to wait the season out and, as we all know, Joe ended up leaving Phoenix for a max deal in Atlanta.

Fan #1 felt, with the benefit of 20/20 hindsight, that the team shouldn't have signed Q. Richardson, which would have made it easier to resign JJ.

I agree. That was a HUGE mistake.

Gambo pressed Sarver on the point, but Robert insisted that a trade doesn't need to happen right now, but getting under the luxury tax for next season is a priority. He insists that the team as constructed can still be competitive and that any trade will have that in mind both in the short- and long-term. The trade (if one is made, and I think it will be) doesn't necessarily have to cut payroll.

Gambo specifically pressed the point on his favorite rumored deal with the Golden State Warriors, which would net the Suns 22-year-old rebounding center, Andris Biedrins, along with all-around "dirt worker," Ronny Turiaf, and young potential stud, Anthony Randolph. The numbers don't exactly line up, but they are close enough that you would think they could make it work.

We did hear today from other sources that newly-acquired Jared Dudley might be involved in a deal either with Amare or on his own.

Sarver addressed the recent reports that he's undermining the team by actively shopping his top players. He described Amare and Shaq as the two highest-paid of his 2500 employees and was insistent that he would be involved in all decisions, but also asserted that it is normal for discussions to happen at all levels of the organization.

He did not deny having conversations but also felt that the reports weren't fully factual and implied that other teams use the media to create drama which they feel can be to their advantage.

I agree there, too. When reading all of these rumors and reports, we always have to remember that any time something is in the media, there's a reason it's there. These are complex games being played by competitive people. Don't be fooled.

Sarver described Porter as having some areas where he could do a better job and that he's had to deal with big personalities and only one ball. He feels that Terry stepped into a very difficult job and that a lot of the issues the team is dealing with are the same issues that faced the team at the end of last season.

While he was appropriately coy on the direct matter, my interpretation is that he's setting up the excuses for Porter's dismissal. What's not clear is how some of that blame doesn't also fall on Kerr for creating the situation that he put Porter into.

I still fully expect that Terry Porter has coached his last game for the Phoenix Suns. I have talked to many people inside and outside the organization that are all saying the same thing, including very specific information about where things are in the process of letting Porter go.

I would be shocked if it doesn't happen tomorrow.