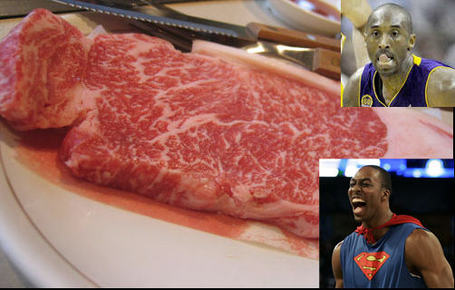 One of the more surreal interviews I heard (while dodging teeth-high elbows) this weekend was Dwight Howard talking to a Lakers.com reporter about Kobe beef.

You can listen in and hear Dwight seem to get a bit confused about the origins of Kobe Beef and its relationship to a certain NBA superstar. Dwight says, "I googled Kobe Bryant and next to his picture was some steaks from his restaurants."

I know you are going to insist that this was a joke and that Dwight Howard knows the difference between Kobe Bryant and Kobe beef but folks, I am here to tell you that the man's face was stone cold serious.

On a more serious note, his teammate Jameer Nelson talks about not being able to play in the game and how being giving the starting point guard position this season has allowed him to play without looking over his shoulder. That might have been a poor choice of words given his unfortunate injury.

Head over to Third Quarter Collapse for all your Magic news