Earlier in the day on Saturday, I asked Pau Gasol what he thought his Spanish teammate's chances were in the Dunk Contest. "Slim" was the response.

Little did I know at the time that Pau would play such an influential role in making his prediction a reality. As we all witnessed, Pau insisted, for reasons that make no sense at all, to throw a behind-the-back pass to the back of the backboard as part of Rudy's dunk attempt.

Those missed passes certainly were influential in reducing Rudy's score on what turned out to be a spectacular jam. If Pau had made the easy pass sooner, Rudy's score almost certainly would have been higher then it was.

Do you wonder why Pau did that? One thing that I noticed this weekend was the infatuation on the part of the Spanish media with Rudy. They completely ignored brother Marc Gasol at Friday's media availability and they were nowhere to be seen on Saturday either.

Yet, when Rudy was around, they flocked to him like the Chinese media did to Yao. 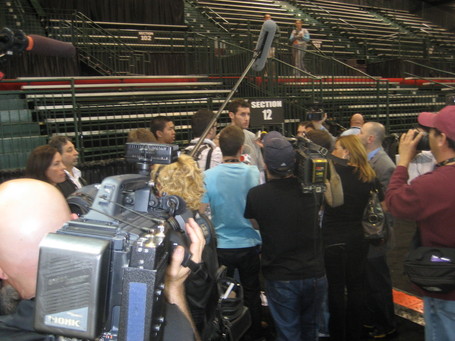 I asked Pau about this as well, and his answer while predictably tactful, perhaps was not fully truthful given what he did to Rudy's chances to even greater fame back home in Spain.

Blazer's Edge (as usual) has all the details and insightful insight