President Obama touched down in Phoenix this afternoon just hours after signing the massive $790 billion stimulus package. While the Hoopster-in-Chief is here in town for some policy speech on housing foreclosures or something, I am hoping our team's chief executive can grab a few minutes of his time to lobby for a little fiscal love too. 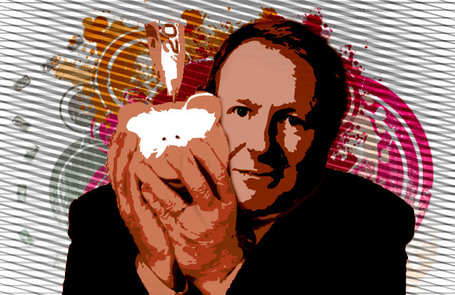 The Phoenix Suns are currently sitting with the 8th highest payroll at $75m this season and are looking at paying about $4m extra for being over the $71m luxury tax line.

Next season the Suns currently have under contract 10 players whose salaries total $76m, and that doesn't include Grant Hill or the other two players the team needs to have on the roster to meet the mandated minimum number of 13 players. That means you are looking at about an $80m payroll.

That's for a season in which it is widely anticipated that the luxury tax line will be lower than it is now. The Suns, if they make no moves, will be looking at a luxury tax bill that would easily be $10m.

What do you think the Suns ownership group -- in this economic climate, facing an almost certain decline in season ticket sales and sponsorship revenue -- is going to do about that? Would you want to pay $10m extra in tax money that goes directly into the pockets of franchise owners who are below the line for a team that has almost no chance of competing for a championship?

I didn't think so.

That brings us to Thursday's trade deadline and Leandro Barbosa. With it looking more and more likely that the Suns will hang on to Amare for the rest of this season, Leandro becomes the one expendable asset on the roster. A guy whose contract is a reasonable $6-$7m per year for the next 3 years. A guy who is coming into his own as a basketball player.

It is my understanding that the discussions are underway to send our Brazilian Blur to Memphis, a team with only $52m on the books which allows them to take The Blur and not have to send back any players at all. You heard that right. We could trade Leandro for a 2nd round pick and that's exactly what might happen.

Memphis is in the driver's seat here. They know that the Suns are desperate to unload salary and are going to drive a hard bargain. You and I might want to get back the fairly inexpensive ($1.1m) Kyle Lowry and at least one first round pick for a talent like Barbosa. He's certainly worth it. But the Grizz are under no pressure at all to make that deal. They have an exciting young combo guard in OJ Mayo already. Why give up their precious cap space AND other assets to make a deal like that?

So, that leaves few options for the Suns ownership group. They can incur the wrath of basketball fans everywhere if they do dump Leandro and get nothing of value in return or absorb a huge financial penalty for the privilege of seeing their aging team struggle.

It is certainly fair to put the blame of this situation on Kerr and Sarver for taking on Shaq's $40million contract last season but in their defense they were rolling the dice on trying to win while there was a chance to do it. It didn't work out, and now we are all stuck with the consequences.

There are a few other options, but they don't seem very likely. Trading Richardson's arrest-laden $13m/yr isn't likely in this climate and I challenge you to find a team that would seriously consider taking Shaq off our hands.

The Suns do have the option of waiting this season out and trying to clear enough salary over the summer but at that point one has to believe a lot of other teams will be looking to do the same thing, which will drive down the price for our star assets. Also, if Barbosa's salary can be moved now, that saves money this year, which lessens the amount that needs to be saved next.

This brings us back to where we started.

President Obama just got approval to spend $790 billion. A measly $10 million of that is all it would take to keep this Suns team together. Barring that, you should prepare yourself for the inevitable fire sale that could come this week and if not then, will surely come this summer.

Perhaps we should take up a collection ourselves. Pennies for Sarver - The Suns Bailout Package.

We would only need one billion donations to make it happen.