Check back -- lots more to come.

Here's a great reference tool when looking at trades and potential trades.

For the definitive look at teams salary situation check this online spreadsheet prepared by Wyn over at Canis Hoopus.

Wyn was also "playing around" and created this history of the Suns trade action over the past few years. I resisted posting this because it is painful to see...but Wyn's hard work deserves your attention. You can click on the image to see it full size. 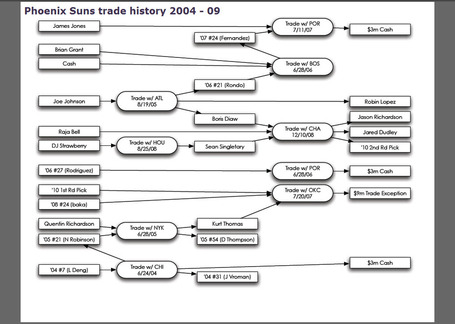 This in under the wire: ESPN NBA - Knicks acquired G Larry Hughes from Bulls for F Tim Thomas

It is possible that things might trickle in in the next hour or so...as @jskeets points out.

Less then 10 minutes to go...looks like a game of GM Chicken is being played out between Danny Ferry and Steve Kerr. Who clucks first?

Contract-wise Wally and Sasha is better then Big Ben and Sasha but think about a Suns line up without Shaq and no big man in return. Amare and then Lou, Barnes and Lopez?

Rebounding is out the window and you are back to the 06-07 Suns but without Marion and Diaw.

Now, if the Suns could get Wally Z and Verejao...but I don't see the Cavs giving up Andy for Shaq. That would leave them w/ three non-mobile centers and no active defensive bigs.

This saves the Suns $2m $5.5m next year and moves Shaq. I am not sure how Ben Wallace looks starting next to Amare. He is a much lesser offensive threat. The real question is can he run the floor and defend the pick and roll better. I frankly don't know. Thoughts on that?

Don't forget that yesterday we heard rumor of JRich to the Cavs for Wally Z which saves the Suns $13m next year and lets LB get starter minutes.

Because only $1.5 million of Pavlovic's contract is guaranteed next season, Phoenix would slice $5.5 million off of its 2009-10 payroll if it agreed to send Shaq to the Cavs.

It's believed, though, that the Suns are resistant to taking back Wallace and thus trying to convince Cleveland to part with Wally Szczerbiak's $13.8 million expiring contract instead, which would turn this into a huge financial windfall for Phoenix.

Six hours to go until the trade deadline. After all the discussions and all the rumors and all the options, I think the Suns will stand pat. Other teams won't.

My pick for the biggest deal to happen today is LaFrenz' contract for Richard Jefferson. I just don't see how Pritchard doesn't improve his team this season using that oh so valuable asset.