On the Dark Side of the Suns

Share All sharing options for: On the Dark Side of the Suns 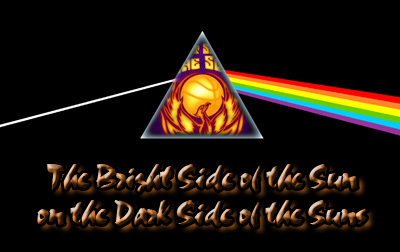 Well, not so much.  In the 2 seasons I've been a part of this blog, I can say that the handling of the Suns has been fairly even-handed.  We do the funny photoshop thing; we extol the team to victory, we try to rally the troops.  However, we have never, ever been bashful about calling things like we see them.  From repeatedly calling out Amare for a lack of maturity (OK, we get it... that bar has been lowered), to hashing and re-hashing the D'Antoni exit (and spreading the blame fairly equally), to the recent bit of wallowing in the Terry Porter miasma, this site has had its fair share of "dark" moments.

For those of you who are new here (welcome!), and those of you loyal participants (thanks!), what you're bearing witness to is NOT a group of bloggers succumbing to baser instincts and being negative for negativity's sake.  I think, what you are seeing and participating in is one group of fans' cumulative frustration with the Sarver era hitting its highwater mark.

This didn't hit me until I saw the excellently executed and depressingly revealing transaction chart that Wyn from Canis Hoopus put together and Stan posted today.  Thus far, Robert Sarver's legacy has been one of underachievement in the present while bungling the future.  And we've been fairly even-keeled about handling that as well.

At one time or another, we've all come to Sarver's defense.  He has not been, as is often the charge leveled against him, a cheapskate.  If he was, the Suns wouldn't be looking at ways to get under the cap.  8th highest payroll in the Association? NOT CHEAP.  I would say better adjectives for the Sarver era are "myopic" and "reactive."

Under Sarver and his GMs, the Suns have basically ignored the draft in favor of more expensive veteran players.  Most of the major trades of the Sarver era have been reactions to misperceived and ill-conceived needs of the Suns as was the more or less forced departure of Mike D'Antoni and hiring and subsequent firing of Terry Porter.

And all those chickens are coming home to roost with the Suns on the brink of financial disaster and basketball irrelevancy.  As lifelong Suns fans, we grew up in the house that Jerry Colangelo built.  Did Jerry bring home a ring?  No.  Was Jerry perfect as a Suns owner? No.  But, Jerry always had a plan and one rarely could look at a move made in Colangelo's tenure and wonder "What the hell was he thinking?"  That vision has been sorely missed in the post-Colangelo era.  No one's going to argue that the teams of the last few seasons haven't caught their share of unforeseeable bad breaks, but I doubt anyone would also build much of a case for a master plan being at work here.

So, you don't like the negativity around there parts of the interwebs?  News Flash: NEITHER DO WE.  But at some point, as in any broken relationship, we as fans have to say (not just to ownership and management, but to underperforming players as well), "Enough.  We've seen this change routine before and yet, you always come back the same as before."  It's ugly and it's not enjoyable, but it's necessary if we are in fact going to enjoy any potential future success.

There's a saying in the recovery world: "Don't give up the day before the miracle."  And while the primary difference between the usual application of that slogan is that one is doing the work on oneself, whereas here we're dealing with an entity over which we have no control, I think it applies.  None of us are giving up on this team.  As I've said before, we BLEED purple and orange here at BSOTS.

But I think it's impossible to argue that it's going to take anything less than a miracle for things to get better on Planet Orange before they get worse.

After re-reading this, I want to make it clear that I still think Robert Sarver is a pretty good guy.  Full post in the name of Bright-Sidiness coming soon.