140 in three straight games. Are you impressed?

You would have to be dead not to be.

Not so much for scoring the 140 in three games (against two 13 win teams) but by overcoming a let down in the 3rd quarter that Alvin Gentry said in the post game was caused by tired legs. After having a 27-point lead cut to 6 the Suns used their active perimeter defense to battle back and bring the game home. 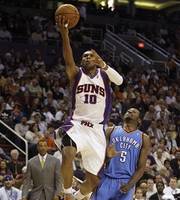 The 140 in this case isn't so much a team honor as much as an individual achievement for Leandro, who scored 5 of his career-high 41 points in the final 1:36 to reach the threshold. He was so exhausted and cramped after the game that Steve Nash helped him to the locker room.

Forty-one points in 41 minutes and his defensive improvement continues to show with 6 steals. I wonder if the Grizzlies are regretting not offering more for Leandro?

Three other things really stood out and are indications that I might be starting down the path to eating some tasty crow for only this morning calling this system doomed.

I still am not a believer. I still think there are fundamental flaws that will reveal themselves in the next two weeks worth of tough opponents. But if there is any glimmer of hope from this game it wasn't from the fast pace or high scoring it was from these aspects of the performance:

1) Shaq played 30 productive minutes with 22 efficient points and 9 rebounds. There were times in this game were he was in the post calling for the ball only to have a wing player shoot over his head. Too much of that isn't going to work. The Suns managed to feed the beast and use him in a timely manner. If he can stay on the floor with this team and help on the defensive glass and be a 3rd or 4th option on offense, that bodes well. The test will come after a couple of losses.

2) The perimeter defense against a fairly good, albeit young, offensive team was solid. I loved how JRich fronted Durant and guys like Dudley and Amundson rotated immediately to squeeze him when the lob pass was made.  Barnes and Barbosa used their thievery skills to get easy fast break points. The pick and roll defense was better as well. One has to wonder how much of that improvement is from not having Amare on the floor.

Again though, the Thunder are not a low post scoring threat and yet it was Collison on the glass and in the post that really helped spark their comeback. You would be foolish to think that bigger, better teams aren't going to exploit those mismatches more effectively.

But if the perimeter defense can remain disruptive and Shaq can stay on the floor and be a presence in the paint, you might be able to live with Barnes and Dudley being undersized. Those matchups on a nightly basis will be key as will the need for Robin Lopez to be able to play serviceable ball against Tim Duncan and Pau Gasol if Shaq gets into foul trouble.

3) The best part of this win was the comeback. After blowing a huge lead the team didn't fold as we've seen so many other times this season. They buckled down, picked up the defensive intensity and fed the ball to Shaq when the jumpers started clanging. The ability to consistently overcome adversity is what will really be impressive if we see it. Tonight was only a taste against a team that never gives up but hasn't learned how to close out a game, either.

Big Loud Welcome to the new SBN Thunder blog (a lot of things sound cool next to "Thunder" like "Thunder Gals" and "Thunder Dogs"...I digress)